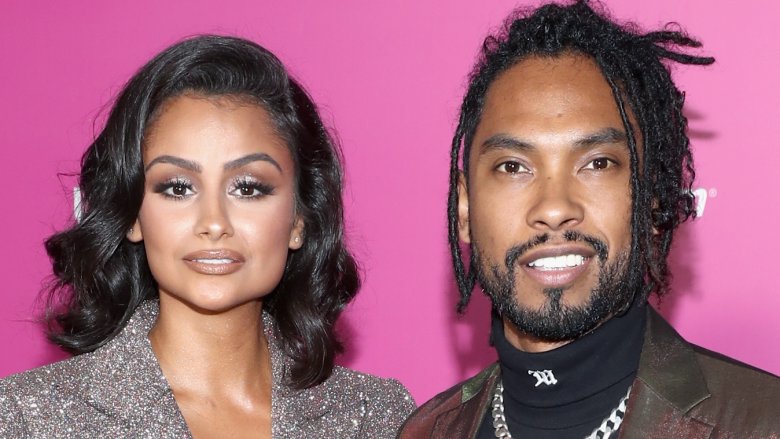 Congratulations to Miguel and his longtime love, Nazanin Mandi!

The “Remember Me” singer married his model fiancée on Saturday, Nov. 24, 2018, as confirmed by E! News. Miguel (full name Miguel Jontel Pimentel) shared photos from his wedding day on Instagram on Tuesday, Nov. 27. In the caption, the 33-year-old wrote, “11.24.18. Pimentel life moments! New levels and unforgettable memories shared with our closest friends and family. So much love and gratitude for everyone that made our special day truly unforgettable. We love you all.”

Mandi, 32, also posted a number of photos, showing off sweet moments from their ceremony on her own Instagram. In her post’s caption, she called her wedding day “truly magical” and “filled w/ so much love, light & positivity.” She continued, “Yes, this was a long time coming but timing is everything & we will continue to do things our way always & forever.”

Before being wed, the couple gave Vogue an inside look into their lives as they prepared for their wedding. The magazine followed Miguel and Mandi around for 24 hours, documenting the pair’s workouts, a meeting with their wedding planner, Mandi’s final dress fitting, and more.

Describing his relationship with Mandi, Miguel told Vogue, “We always felt like we were very connected, like, from the beginning.”

As Nicki Swift previously reported, Miguel and Mandi made headlines on Nov. 20, after they were seen getting a marriage license in a Los Angeles courthouse. They were said to have signed some documents while surrounded by a few supportive friends.

Miguel and Mandi have reportedly been dating since 2005, when they were both 18 years old (via TMZ). Mandi told Vogue that they first met at a casting for Miguel’s first music video. “They asked me to interview him for a behind-the-scenes DVD he was putting out,” she explained to the magazine, “and I asked him, I said, ‘You know, all the ladies want to know — do you have a girlfriend?’ And he smiled, and he said, ‘No, but I’m looking for one.'”

After dating for over a decade, Miguel proposed to Mandi while they were on vacation in 2016.