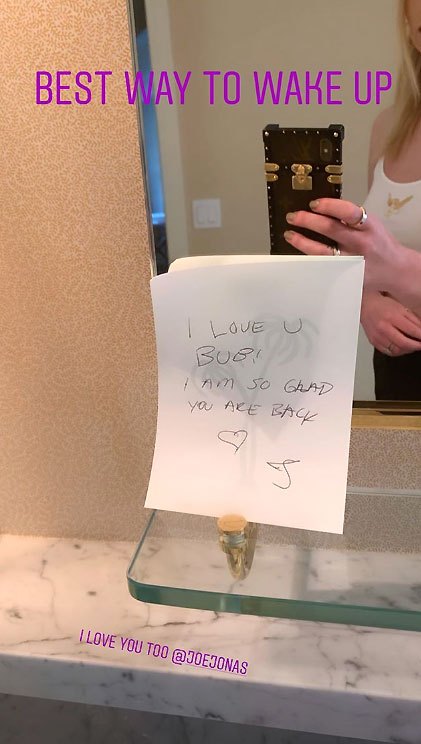 Relationship goals! Sophie Turner was met with a heartfelt reminder of fiancé Joe Jonas’ love when she returned home from a trip to Paris.

Turner, 23, was recently in the City of Light to promote her new movie, X-Men: Dark Phoenix, while Jonas, 29, stayed behind in the States. On Sunday, April 28, the Game of Thrones actress posted an Instagram Story of a sweet note the Jonas Brothers member left on her mirror to welcome her home.

The letter read, “I Love U Bub! I am so glad you are back <3 J.” The British actress said receiving the message was the “best way to wake up” and added, “I love you too @joejonas.” 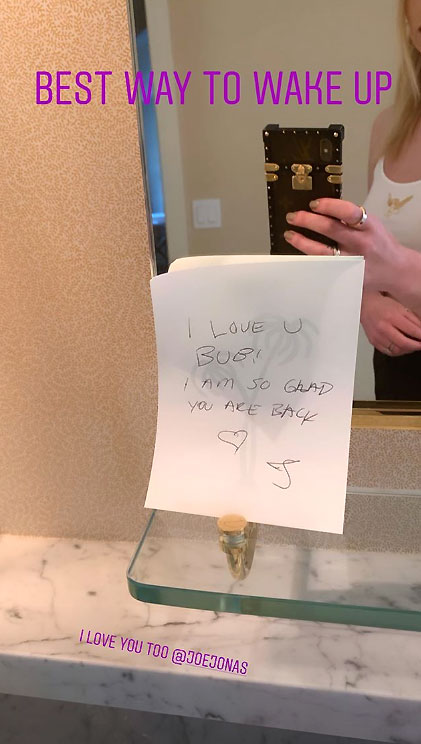 In March, the Josie star gushed about the musician’s role in helping her find herself. “A lot of [my happiness now] is to do with being with a person I’ve fallen in love with, who loves me more than he loves himself, and who wants to see me find my own happiness,” she told Glamour U.K. “That was probably the biggest thing that pushed me to find who I am — and find my happiness in things other than acting.”

The pair, who announced their engagement in October 2017 after nearly a year of dating, will tie the knot in Paris this summer. Turner revealed earlier this month that her GoT costar and real-life best friend, Maisie Williams, will serve as “one of two” maids of honor at the ceremony.

The “Cake by the Ocean” singer has not revealed who will stand by his side at the alter, but he did tell radio host Zach Sang that he learned a lot from his younger brother Nick Jonas’ December 2018 wedding to Priyanka Chopra Jonas.

“A lot of Coors Light is necessary,” the DNCE frontman explained. “Not hard, really, to get that, but we needed to make sure that was going to happen.”

The need for an abundance of beer came after the “Jealous” crooner, 26, and the Quantico alum, 36, ran out of the beverage at their reception. Nick quipped, “Our friends drink a lot of beer, specifically, and we ran out of beer at the wedding, at my wedding, which was a big issue.”