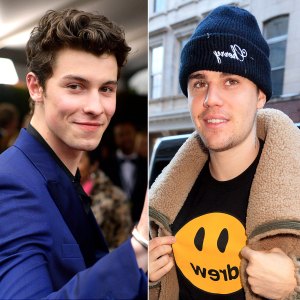 A Prince of Pop showdown? Shawn Mendes isn’t sure whether he would beat fellow Canadian crooner Justin Bieber in a fight.

“I think I’m bigger, and I weigh more,” Mendes, 20, said on Elvis Duran and The Morning Show on Friday, May 3. “I think he has another, like, type of level that he can click into that I don’t have. I don’t possess the switch that I think he [has].”

Bieber, 25, ribbed the “In My Blood” singer last month after Mendes posted a cover of The Observer magazine that declared him the “Prince of Pop.” 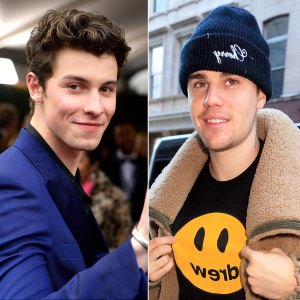 “Hmm,” Bieber wrote at the time. “Gonna have to break a few more records to dethrone my title there bud.”

On the radio show on Friday, Mendes said he immediately regretted sharing the magazine cover on Instagram. “I’m not going to lie, when I got the photo from that paper, I was like, ‘Should I post this? I don’t want people to think I’m saying I’m the prince of pop. It’s just what the headline said and the photo. And there’s other princes of pop, like Bieber,’” he said. “I was like, ‘No, I’m just going to do it. It’s no big deal.’ The second I posted it, I was like, ‘Shouldn’t have done that!’”

But the Toronto native — who released his new single “If I Can’t Have You” on Friday — found Bieber’s comment hilarious. “He is so funny,” Mendes told host Elvis Duran. “And I honestly pretty much live to read the comments that he posts on photos now because they’re hilarious. He’s so real-life about everything now. It’s great.”

Plus, Mendes cited the “Sorry” singer as one of his idols. “He is one of the main reasons I started doing what I do — and probably not just me [but] many, many other pop artists and other artists in the industry right now,” he said. “He’s a trailblazer.”