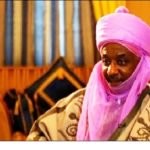 Isah Bayero who was a former pilot with Kabo Airline was appointed Emir Sanusi’s aid in 2014 when the former Central Bank of Nigeria (CBN) governor mounted the throne following the death of the late Emir, Alhaji Ado Abdullahi Bayero.

Sources close to the Kano Emirate Council confided in The Nation that the Isah Bayero was shown the exit yesterday as he was accused of being responsible for the leak of information concerning the spending of the council’s funds, which led to public outcry and subsequent investigations into the spending of the Emirate Council by the state Anti-Corruption Commission and Kano State House of Assembly.

The Nation recalls that Emir Sanusi 11 came under public criticism when it was alleged that he inherited N4 billion from the late Emir of Kano, His Highness, Alhaji Ado Abdullahi Bayero.

The allegation prompted a Press Conference by the Emirate where the Chief Finance Officer of the Palace, Walin Kano, Alhaji Mahe Bashir Wali, reacted to reports that the Emirate spent N4 billion left behind by the former Emir, describing the allegations as untrue.