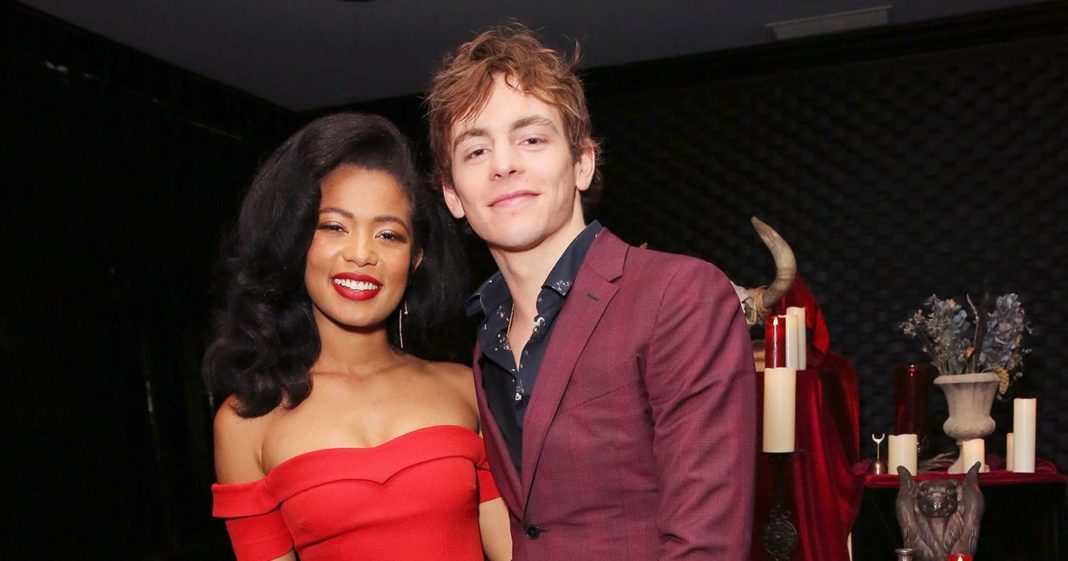 Days before their teen drama returns for another season on Netflix, the Austin and Ally alum, 23, and the Paper Towns actress, 24, were spotted getting cozy on Wednesday, April 3, at a screening of the show and cast Q&A at The Roxy Hotel in New York City.

“They were sitting on a couch together, his arms were around her waist,” an eyewitness exclusively tells Us Weekly. “They were looking into each other’s eyes … noses touching and giggling.”

Things escalated for the pair moments later, as they started “kissing on the couch together,” the eyewitness reveals.

Lynch, who portrays the Harvey Kinkle to Kiernan Shipka‘s Sabrina Spellman on the series, played it coy when asked about his offscreen relationship with Sinclair, who plays Rosalind Walker, in January.

“You know, when I first went up to Vancouver … me and Jaz and a few of the other actors really just hit it off and we would spend every day together,” the former Disney Channel star told Entertainment Tonight at the time. “So Jaz is, like, my closest friend right now.”

The duo fueled relationship rumors in December 2018, when the Dallas-born star Instagrammed a picture of herself and the musician on his 23rd birthday. “Happy Birthday to my favorite,” she wrote. “I’m really happy you were born. Here’s to many more good chats, belly laughs and dances in the new year.”

The blond was previously linked to Status Update costar Courtney Eaton. Though the pair are no longer dating, they remain friendly — so much so, in fact, that she celebrated her 23rd birthday in January with Lynch … and Sinclair!

“I got to spend my birthday with all the people I love dearly! … thanks for being my favorites” the Mad Max: Fury Road actress captioned a series of pictures, which included the two Netflix stars, as well as most of Lynch’s siblings.

Season 2 of Chilling Adventures of Sabrina will be available on Netflix on Friday, April 5.