Wowplus
Home World News Ronaldo Uses A Phone To Get A Better Look At His Handsome... 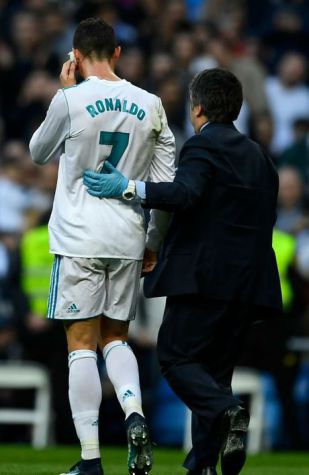 The Real Madrid striker however took vanity to a whole new level and got mocked on social media last Sunday after Real Madrid’s 7-1 thrashing of Deportivo La Coruna in the Spanish league.

Cristiano Ronaldo had received a defender’s high boot to the head after heading home his second goal.

Ronaldo’s bravery left him lying on the ground with a gash and a bloodied face.

What upset social media was that after the team doctor raced onto the pitch to patch him up, Ronaldo couldn’t resist grabbing the doc’s phone to survey the damage.

The doctor had cleaned up the blood spilling down the Portuguese superstar’s face when Ronaldo asked for the doctor’s phone so he could take a look at the extent of his injuries.

After assessing the damage, Ronaldo left the field, despite his side having already made three substitutions, although the much-needed victory was already secured by then.

This spontaneous show of self-love saw some fans and pundits give the Portuguese poser a hard time. see reactions below: