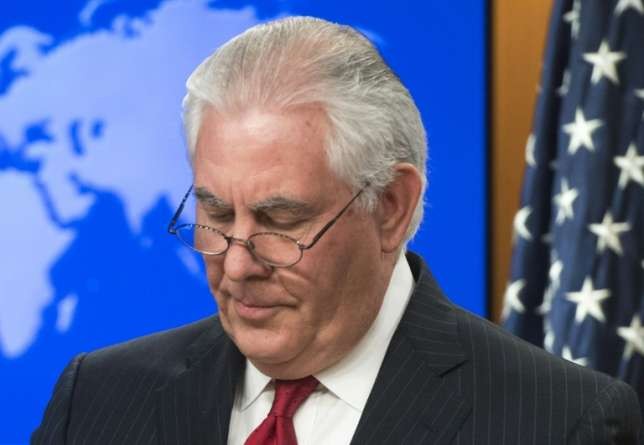 President Donald Trump’s sacking of Secretary of State Rex Tillerson could sound the death knell for the Iran nuclear deal and further strain US ties with key European allies.

President Donald Trump‘s sacking of Secretary of State Rex Tillerson could sound the death knell for the Iran nuclear deal and further strain US ties with key European allies.

In explaining his decision to fire Tillerson, Trump said they had disagreed on many topics, but he specifically singled out one dispute: Whether or not to stay in the Iran pact.

“When you look at the Iran deal. I thought it was terrible. He thought it was OK,” Trump said. “I wanted to either break it or do something, he felt a little differently. So we were not really thinking the same.”

On May 12, in exactly two months, the US leader is to pronounce on the fate of the Iran deal. If sacking Tillerson is any indicator of Trump’s decision on the issue, it suggests the accord is in trouble.

If, as now appears likely, Trump indeed decides to drop out of the Joint Comprehensive Plan of Action (JCPOA), then the deal — and the hopes of a generation of European and US diplomats — will be dead.

“We’re also working with allies and partners to block Iran’s path to a nuclear weapon and confront its sponsorship of terror and bloodshed all around the world,” Trump said later in a speech at Miramar Air Base in California.

“Everywhere we go in the Middle East it’s Iran, Iran, Iran. Every problem is Iran. Well, we’re dealing with it in a very serious fashion. One of the worst deals I’ve ever seen, was the Iran deal.”

Under the JCPOA, adopted in October 18, Iran surrendered much of its nuclear infrastructure and opened the rest to international inspection in exchange for international sanctions relief.

The deal was signed between Tehran and six world powers: Britain, China, France, Germany, Russia and the United States.

The other signatories still regard the accord as a landmark victory in the battle to stop the spread of nuclear weapons. Iran denies it has sought such arms, but warns it could restart fuel enrichment quickly.

For his part, Trump campaigned condemning the accord as the “worst deal ever” and in office he has given ear to hawkish advisors who say it does not do enough to halt Iran’s alleged quest for the bomb.

Tillerson and his cabinet ally Defense Secretary Jim Mattis have urged Trump to listen to his European allies and to preserve the deal intact, while seeking new measures to pressure Iran.

With Tillerson out of the picture — and replaced by CIA director and Iran hawk Mike Pompeo — Trump is all the more likely to follow his first instinct and blow up the entire accord.

For Thomas Countryman, who was assistant secretary of state for international security and nonproliferation from 2011 to 2017, the reshuffle could have catastrophic consequences for US national security.

Countryman argues that Tillerson “served as a Cabinet-level check on some of President Trump’s worst impulses, such as wanting to ‘break’ the Iran nuclear agreement.”

“Mr. Pompeo instead favors an aggressive Middle East policy that would undo the diplomatic progress we made on nonproliferation and potentially embroil us in a new conflict in that region.”

Mark Dubowitz of the hawkish Foundation for Defense of Democracies rarely agrees with Obama-era diplomats — but he does agree that Pompeo’s arrival is bad news for the deal.

“For those Europeans (and Americans) who think Trump is not serious about walking away on May 12th if there’s no agreement to fix the Iran nuke deal, I give you Exhibit A: his soon-to-be Secretary of State Mike Pompeo,” he tweeted.

For the moment, US diplomacy is carrying on as before.

State Department officials told AFP that Tillerson’s chief of strategy Brian Hook will be in Berlin on Thursday to meet British, French and German officials about efforts to reform the deal.

This “fix” would expand the agreement to include restrictions on Iran’s ballistic missile program and end the “sunset clauses” that allow Tehran to resume some enrichment within 10 years.

European leaders have expressed some sympathy for these ideas, if they would help bind Trump’s America into a deal they regard as vital for their own national security and Middle East peace.

But they are looking at a possible “supplement” arrangement that would leave the core deal intact — and perhaps preserve Iranian support for it — while adding a separate annex to address Trump’s concerns.

This in itself may not be possible, but even if it were, it might not go far enough for Trump and his new chief diplomat, Pompeo.

At the weekend, respected Israeli journalist Barak Ravid of Channel 10 news reported that, last week, Trump promised Israeli Prime Minister Benjamin Netanyahu that he would not accept a supplemental deal.

Israeli officials told Ravid that Trump opposes Europe’s “cosmetic changes” and wants a “significant” rewriting of the Iran deal itself. This would almost certainly destroy the agreement.