Release me and I’ll turn a pastor, says teenage robber caught with 3 guns 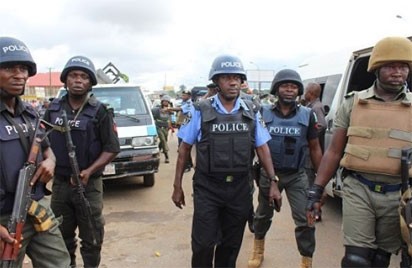 Release me and I’ll turn a pastor, says teenage robber caught with 3 guns
A teenage robbery suspect, Emmanuel, who was recently arrested by the Police in Lagos shocked detectives when he knelt down, weeping and begging to be set free; he promised become a pastor. The suspect, a student of Government Model Secondary School in Lagos, was paraded by Lagos Police boss, Imohimi Edgal, alongside 19 other robbery suspects arrested in different locations. He said: “I am a student of Government Model Secondary School. I was arrested because I went to rob with members of my gang on the Island. This is the first time I am participating in robbery. “Our leader is AY, and three others who escaped when Police came. The Police recovered three guns from me. They abandoned their guns inside the vehicle. I was holding the dagger while the others held the guns. “I am feeling terrible; if God saves me from here, I will be a Pastor. I am a mass server and I do receive Holy Communion.
Share
Facebook
Twitter
WhatsApp
Pinterest
Linkedin
ReddIt
Email
Print
Tumblr
Telegram
Mix
VK
Digg
LINE
Viber
Naver
Previous articleOyegun, Amaechi absent as South South leaders back Oshiomhole for chairman: APC convention
Next articleDrama, as Melaye lands in hospital after escape from police team