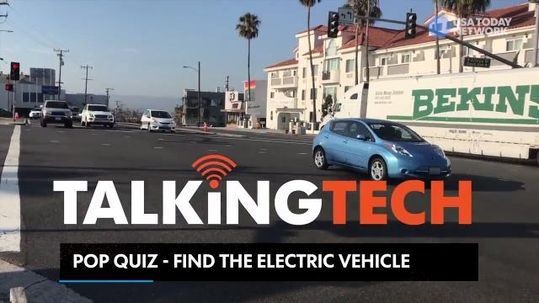 Consumers sound off on Volvo’s announcement that it will ditch gas engines by 2019–who’s ready for an electric road in just a year and a half? Jefferson Graham reports on #TalkingTech.

Andrea Joannou, second from left, is surrounded by friends at a Starbucks in Manhattan Beach. They all drive electric cars.(Photo: Jefferson Graham)

The headline was a head scratcher. Volvo, the company whose cars and trucks have lined our roads for decades, to ditch gasoline engines by 2019.

Wait a minute—does this mean we won’t be stopping into Chevron, Shell, Exxon or Arco stations to gas up every week? Will we really be going all-electric or hybrid in just a year and a half?

Volvo just became the first automaker to set a date for phasing out combustion engine cars. All of Volvo’s cars launched after 2019 will either be electric or hybrid. Newslook

Nathan Bomey, the USA TODAY automotive reporter who covered the Volvo story, joined me on an extended #TalkingTech podcast this week for a reality check.

What you need to know: we’re not going all electric anytime soon. In fact, if the trend is to truly take off, it won’t be for decades to come.

The Volvo announcement “doesn’t match up with what we’re seeing,” said Bomey.

Electric sales and hybrid sales are currently anemic, with less than 1% U.S. market share in 2016, compared to 43% for gas-guzzling small SUVs, according to Kelley Blue Book. (ICYMI, one more time—we are a nation that loves big cars that cost mucho bucks to fill up with unleaded and premium.)

But Volvo believes the demand will eventually get there for electric cars, especially in other markets like Asia and Europe. So it’s pivoting towards a different kind of future.

For now, a handful of pure electric cars are available, from Ford, BMW, Nissan, Chevrolet and Tesla, none of which are at the top of the best-seller lists.

That could change soon. But not this year.

Tesla has serious buzz as the cutting-edge car company, led by charismatic CEO Elon Musk, and this month releases its first consumer-priced vehicle, the $35,000 Model 3. (Other Teslas can sell in the $90,000 to $120,000 range.)

While no electric car has turned into a mass market hit, veteran tech analyst turned investor Gene Munster thinks the Model 3 will be the one—and as big of a game changer as the introduction of the iPhone ten years ago.

“We believe we will eventually look back at the launch of the Model 3 and compare it to the iPhone, which proved to be the catalyst for the shift to mobile computing,” he wrote in a recent note to investors.

Only customers who pre-ordered the Model 3 could get their vehicles this year. Customers who decide to buy now won’t see them until mid-2018, early 2019. Just in time for Volvo’s electric cars to start taking off, perhaps?

Catch our #TalkingTech video report, with reactions from consumers, here.

Meanwhile, in other tech news this week:

—Pokemon Go turned 1 year old—but where are the players? A year ago, the poster child for what augmented reality could bring to a videogame was released, and it was a national sensation. The game is no longer atop the app charts, but it does have 65 million monthly active users, according to game developer Niantic Labs. That’s a drop from its peak of 100 million in August, based on Apptopia estimates. It’s generated $1.2 billion in revenue, the research firm says, and gave part-owner Nintendo a needed boost to its brand.

—Amazon Wine. Add wine to the growing list of businesses Amazon wants to make its mark on. The tech giant is partnering with the King Estate Winery based in Eugene, Ore., on the sale of a wine called Next, available exclusively through the e-retailer and the winery. King Estate is the first wine “developed from conception to release with Amazon Wine,” says the winery. It will offer a Pinot Gris, a red blend, and Pinot Noir. Bottles start at $20, or you can buy all three for $90.

Our tech week in Audio

—Selfie enhancements. A new app from the maker of Prisma, Sticky AI, and an update to Snapchat brings the Selfie to a new, wild level.

—Hacked – don’t answer that call. We report on the latest wave of phone scams and how to protect yourself.

—The End of the Gas Station? Our #TalkingTech on Volvo’s no-gas engine moves, and how to charge your car up in the future. With USA TODAY’s Nathan Bomey.

—The Art of Travel Photography. We run down tips for taking great, postcard worthy travel photos.