Realisation of Biafra republic near – Kanu 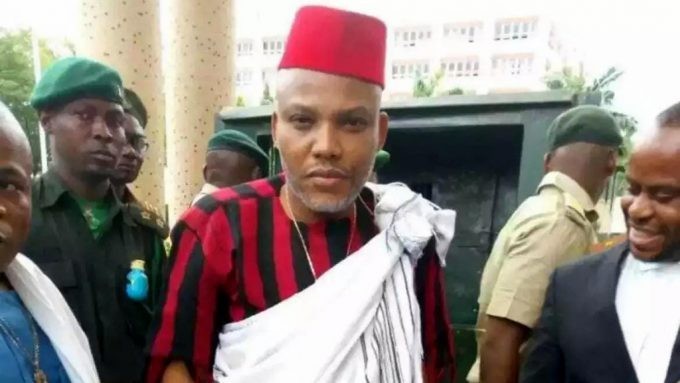 The leader of the Indigenous People of Biafra, Nnamdi Kanu, on Wednesday, said the realisation of a Biafra republic was near.

Speaking through IPOB’S media and publicity secretary, Emma Powerful, Kanu described the level of compliance with the sit-at-home order on Tuesday as satisfactory.

He said he was encouraged by the outing, vowing that he would stop at nothing in ensuring that the people of the area were liberated from the stranglehold of their oppressors.

He thanked “friends of Biafra and lovers of freedom all over the world for their tenacious efforts that made our Heroes Day Sit-At-Home Order a resounding success”.

“In line with this remarkable sit-at-home held yesterday(Tuesday)I will not hesitate to congratulate the people of Abia State, Anambra State, Akwa Ibom State, Bayelsa State, Cross River State, Delta State, Ebonyi State, Enugu State, Imo State, Rivers State including the good people of Igbanke in Edo State, Igala clan in Kogi State and Idoma/Igede/Agatu in Benue State for sending a clear and unmistakable message to the whole world that this Biafra self-determination effort driven by IPOB is uncompromising.

“The fact that our people obeyed the order to sit at home is confirmation that IPOB which I lead has the mandate of all Biafrans to spearhead the ongoing Biafra restoration effort.

“Special thanks goes to my deputy Mazi Uche Mefor, our Directorate of State led by Mazi Chika Edoziem and the indescribably incredible IPOB Family all over the world.

“Those in the diaspora who poured themselves into the streets in distant and foreign lands in more than 98 countries of the world to honour and remember our fallen heroes and heroines who paid the ultimate price during the genocidal war against our people in 1967 and 1970. I appreciate your enormous work because IPOB has made it possible in less than four years for every president and head of state around the world to know about Biafra.

“With near total compliance with this sit-at-home order I issued when I was still in Kuje Prison Abuja, it has proven to me beyond every conceivable doubt that Biafra restoration is a priority to all and sundry and I promise never to let Biafra down even upon the pain of death because you never let me down.

“We must join hands together, with all genuine and sincere individuals and groups, to restore Biafra with truth and honesty.

“I also wish to acknowledge and appreciate the presence of international observers and foreign journalists who were on ground to monitor this epic historical event. It demonstrates that the unique formula adopted by IPOB to restore Biafra is working. By the grace of Almighty God Chukwu Okike Abiama, IPOB under our divine leadership will restore Biafra in no distant future”.