Reader Question: What Do I Do If My Boyfriend Won’t Propose? 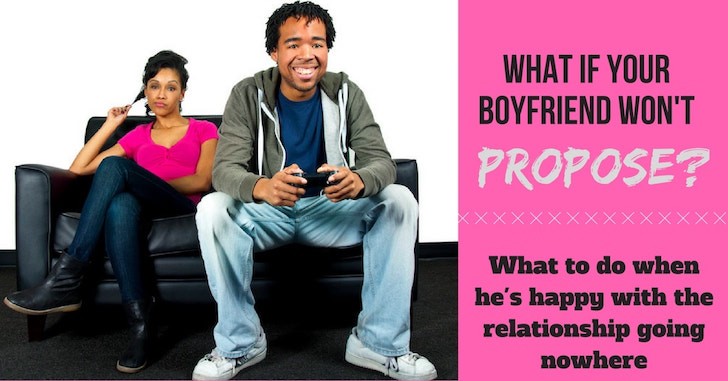 What do you do if your boyfriend just doesn’t seem that interested in getting married?

Last week was a big one–I spent the week tackling the idea that every man will lust, and I’m excited to get back to the regular swing of things!

Today we’re answering a reader question about how to actually go from dating to married. We’ve talked a lot about how to find someone, what signs to look for that signal “he’s a good man,” and the like, but we’ve been getting lots of reader questions asking for more specific advice. A lot of the questions are like this one:

I just came across your blog and have been really encouraged by it. I’m a single girl in my 20s and was intrigued by your relationship story – I understand your blog is mainly aimed at married women, but wondered if you’d consider more content on how you got from single to married – e.g. How you decided to marry your husband and general dating advice. And maybe how you handled general dating anxieties. Thanks again for your godly wisdom.

Good question! I’m taking a break today, so I’m handing this one over to Rebecca.

Okay, so you’ve found a guy. You’re dating. You think he’s a good guy and would make a great husband. So how do you actually get from girlfriend to wife when he doesn’t seem too eager to propose?

I’m not gonna lie: I had it easy when it came to getting married. I experienced my fair share of rejection before I met Connor, but both of us knew from the beginning of our relationship that we wanted to end up together. But for a lot of couples, that’s not the case. Instead, many women are caught in relationships with men they love but who don’t seem too interested in popping the question any time soon.

And that’s hard. And it’s even worse when you see women after these relationships break apart, having given sometimes 6 or 7 of her best dating years to a guy who never even considered marrying her.

So I thought today I’d try to help. It’s a tough question, though, so let me know in the comments what you’d add.

Here are 3 things to keep in mind if you want to get married, but he doesn’t seem too eager:

When Your Boyfriend Won’t Propose: What to do if the relationship is going nowhereClick To Tweet

1. You need to openly communicate what you want from the relationship

If you want to get married, you’ve been dating for a long time, and he’s not making any moves, tell him what you want. It’s perfectly acceptable to say, “I really love you, I think we are amazing together, and I am just wondering if you think this relationship is heading towards marriage, or if that’s a road you don’t want to go down with me.” This isn’t a “trap-him-in-the-corner-until-he-proposes” conversation–it’s simply a question. He could say, “Yes, but I’m not ready right now and I don’t think I’ll be ready for a while.” And then you can talk about whether or not that works for you. But whatever his answer is, at least you know.

So many women are afraid to admit to their boyfriends that they want to be married. But it’s much better to have an awkward conversation than to be in a relationship that’s going nowhere.

2. Work on becoming the kind of woman who would make an amazing wife

Marriage is a big deal. A guy wants to know that the woman he marries is going to be able to be a partner he can depend on. I know many people who waited to propose longer than they would have liked to because their girlfriends hadn’t moved out of their parents’ homes yet, or hadn’t ever had a job before. They wanted to make sure that they were mature enough for a marriage. And that’s only fair–we have similar expectations for men.

The flip side of this is that even when a woman is completely ready for marriage, lots of guys still aren’t thinking about proposing. In these situations, when a guy won’t propose many girls react by moving in with their boyfriends, hoping that will show them “We work so well together–marriage would be amazing!”

But for a lot of guys, moving in together removes almost all incentive to get married. It’s sad, but it’s true.

Settling for less than you want from life for a chance that he’ll finally get on board with the whole marriage thing just isn’t a good idea. Instead, work on becoming the best version of yourself you can be without compromising your values–the “you” that God made you to be. That way, with or without your boyfriend, you’re getting closer to God and better understanding yourself. Both of which are important traits for adult life, single or married.

If you want to get MARRIED, don’t waste years with a boyfriend who doesn’t.Click To Tweet

3. Some guys just aren’t worth your time

Listen, if you’re a good person who is dating a guy who just doesn’t want to marry you, that is not on you. Some guys just aren’t worth your time, and that’s hard to accept. Especially if you’re really in love with him.

I really wish I had an easy answer for these situations. But I don’t. So instead, I just want to say this:

Your identity, your worth, is so much greater than what a guy does or does not think of you. Whether or not you get married, whether or not he’s the one who marries you–you are still who God created you to be. And he didn’t create you to waste your time on boys who don’t respect you. You have been created for a purpose. And if getting married is a part of that plan, don’t waste your twenties on men who aren’t interested in that path. If he doesn’t want to marry you, that’s not on you–that’s on him.

God didn’t create you to waste time on boys who don’t respect you.Click To Tweet

So please remember: even if you get married to the man of your dreams, your worth isn’t found there. It never was, it never will be. Your worth is in God, so don’t be afraid to say “no” to people who just don’t see that.

What advice do you have for women in relationships that don’t seem to be going anywhere? Let’s talk about it in the comments–this is a tricky one!