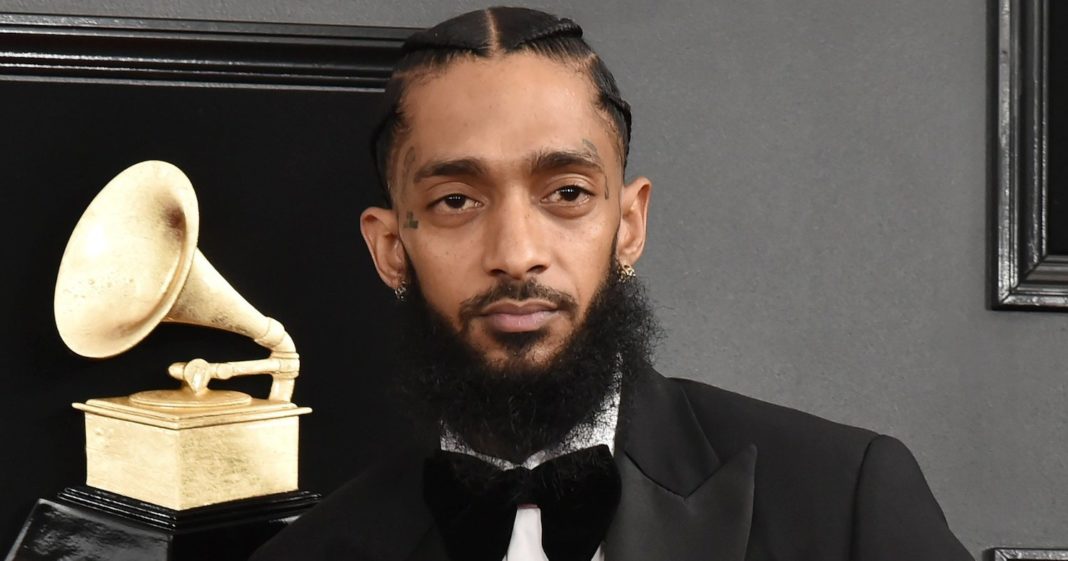 Nipsey Hussle has died after being shot outside his store in L.A. on Sunday, March 31, Us Weekly can confirm.A law enforcement source told Us that the rapper “was shot and killed in front of Marathon Clothing store on Slauson Avenue in Los Angeles. Police are still investigating.”

TMZ reports that the musician, 33, was one of three people gunned down outside his clothing company in the Hyde Park neighborhood of Los Angeles. Eyewitnesses reportedly heard multiple shots fired.

The Los Angeles Times reports that he was shot multiple times and Los Angeles police have closed off the area as they investigate the shooting.  NBC News reports that the two other men are in serious condition and the suspect remains at large.

Shortly before the incident, Hussle, who was nominated for Best Rap Album at the 2019 Grammys for his debut studio album, Victory Lap, tweeted, “Having strong enemies is a blessing.”

Having strong enemies is a blessing.

The rapper, whose real name is Ermias Davidson Asghedom, had long been associated with the Crips, one of L.A.’s biggest street gangs, and confirmed his affiliation in an interview with Complex magazine in 2010.

In March last year, he opened a center in the suburb of Crenshaw to promote diversity in the fields of science, technology, engineering and mathematics. “In our culture, there’s a narrative that says, ‘Follow the athletes, follow the entertainers,’” he told the Los Angeles Times at the time. “And that’s cool but there should be something that says, ‘Follow Elon Musk, follow [Mark] Zuckerberg.’ I think that with me being influential as an artist and young and coming from the inner city, it makes sense for me to be one of the people that’s waving that flag.”

Hussle is survived by his two children and longtime girlfriend The Game actress Lauren London.

Drake, Snoop Dogg, Rihanna, Soulja Boy, Gucci Mane and Chance the Rapper were among the stars who took to Twitter to offer their condolences after news spread of Hussle’s death on Sunday.

“F–k. My whole energy is just at a low right now hearing this,” Drake captioned a photo of Hussle on Instagram. “We just linked for the first time in years and said we were gonna do a new song this summer cause it had been too long. You were having the best run and I was so happy watching from distance fam nobody ever talks down on your name you were a real one to your people and to the rest of us. I’m only doing this here cause I want the world to know I saw you as a man of respect and a don. Rest easy my g.”

Rihanna shared a photo of the rapper and his daughter at the Grammys on Instagram and wrote, This doesn’t make any sense! My spirit is shaken by this! Dear God may His spirit Rest In Peace and May You grant divine comfort to all his loved ones! ??? I’m so sorry this happened to you @nipseyhussle.”

Pharrell Williams tweeted, “You were about something..positive and for your community in every chance you had to speak..and because of that You inspired millions..millions who will uphold your legacy forever. rest amongst the stars.”

RIP Nipsey. I just spent Thursday with him filming a video for a beautiful new song we created with Khaled. We filmed in Inglewood, close to where he grew up. He was so gifted, so proud of his home, so invested in his community. Utterly stunned that he’s gone so soon.

Watching Nipsey inspired me to invest and own in our communities. He was a solid man who loved his woman, his family and his community. This hurts.

Broke me…. we really fighting for our lives against our own kind and really have to take risk and match the level of hatred that we are born in .. I’m tired ?? prayers for my brother and his family

Maaaan this got me sick… prayers to @LaurenLondon and the rest of the family ?? #RIPNipsey