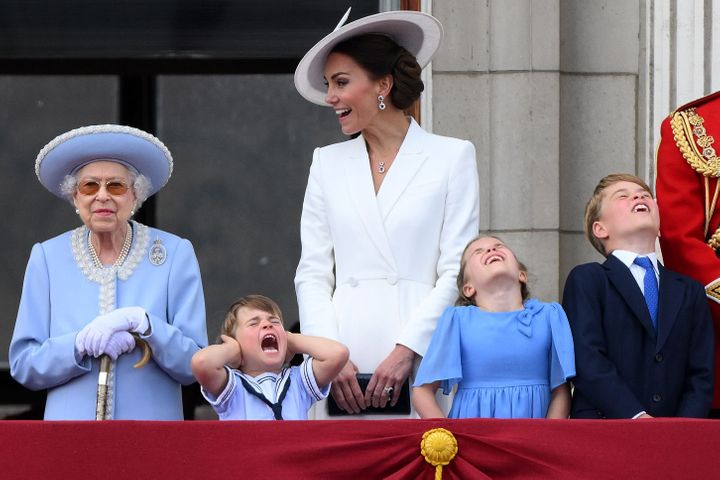 It looks like things got a little too loud for Prince Louis during Queen Elizabeth’s Trooping the Colour celebrations on Thursday.

The 4-year-old appeared to let out a yell and cover his ears in a hilariously meme-worthy moment during the royal family’s Buckingham Palace balcony appearance.

Louis’ covering-his-ears moment was slightly reminiscent of bridesmaid Grace Van Cutsem from Prince William and Kate Middleton’s wedding, who found the noise and attention a bit overwhelming when she appeared on the balcony alongside the couple in a now-iconic photo from April 29, 2011:

Alongside Prince Louis and his adorable faces, Prince William, Kate Middleton, Prince George, Princess Charlotte, Prince Charles, Camilla, the Duchess of Cornwall and others joined all the queen to view the Royal Air Force’s 70-aircraft flyover appearance following the parade, which kicked off the queen’s official Platinum Jubilee celebrations.

All of the young children found a wonderful way to steal the show with their expressions:

This year’s Trooping the Colour, which marks the official birthday celebrations for British monarchs, included a major first for George, Charlotte and Louis.

The children appeared for the first time in carriages at the event, before stepping out on the Buckingham Palace balcony alongside other working members of the royal family.

Thursday’s event marks the beginning of the queen’s Platinum Jubilee celebrations, which will extend to Sunday, June 5.

Prince Harry, Meghan Markle and their two children ― Archie and Lilibet ― are also in the U.K. to help ring in the celebrations.