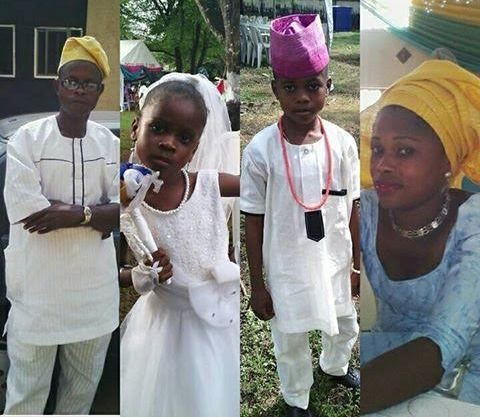 Badoo, a ritual cult terrorising Ikorodu and its environs has struck again, killing a pregnant woman, her husband and two of their three children.

The death of the family members, who lived on Olaiya Close, Erunwen, Ikorodu, brought the number of the times that the gang has struck, which was reported by our correspondent, to eight in 11 months. A whole family was wiped out in some cases.

After the latest attack, many residents of Erunwen had reportedly vacated the neighbourhood.

PUNCH Metro learnt that the victims – Israel Olusanya, 46; Rukayat Olusanya, 37; Wale Olusanya, 11; and six-year-old Semilore Olusanya – were found dead in their apartment on Tuesday, with a bloodstained pestle believed to have been used on them by the assailants.

The only surviving member of the family, a 15-year-old Senior Secondary School  three pupil, Tolu Olusanya, who sustained facial injuries, is said to be in a critical condition at the Lagos State University Teaching Hospital, Ikeja.

It was gathered that a colleague of Rukayat, a teacher in a secondary school in the community, noticed that she was absent from the school on Tuesday. The colleague was said to have checked on her after calls to the deceased’s mobile phone rang out.

Our correspondent gathered that the visitor, on getting to the Olusanya’s residence, found the entire family in a pool of blood and raised the alarm.

It was learnt that the attackers gained entry into the apartment after tearing up the window net. They smashed their victims’ heads with the pestle and reportedly cleaned part of their blood with a piece of cloth before leaving.

Rukayat’s elder brother, Pastor Paul Oyeyemi, said many residents had fled the community while some landlords, who did not want to abandon their property, were living in fear. He added that their parents had been inconsolable since the incident happened.

He said, “Somebody called me on the telephone and said my sister, her husband and their two children had been killed by the Badoo gang. I rushed down there. We took Tolu to LASUTH. She has been stabilised, but she can’t talk now. It was my sister’s colleague in the school that drew people’s attention to the incident.

“The husband was a fish farmer. As I speak with you, I am about to leave this neighbourhood too. Government should put an end to these attacks.”

Another resident, Babajide Olanrewaju, lamented the porous entries into the community, adding that traditional rulers in Ikorodu, the state government and security agencies had not taken necessary action to stop the attacks.

He said, “The family moved together. You hardly saw them apart. The husband has poultry and a fish pond. The wife’s elder brother (Oyeyemi) is my neighbour.

“When my wife told me what happened, I asked her to pack our belongings immediately, and we left the community. Who knows the next target of these people?

“My anger is that we traditional rulers and members representing us in the state and the federal Assemblies, but nobody is talking. The policemen that are supposed to provide security will be chasing Yahoo boys (Internet frausters).’’

The spokesperson for Ikorodu Ambassadors Group, Rasheed Fatuga, said vigilance groups had tried their efforts to curtail the attacks.

“Community leaders are trying their best to address the situation, but we have not heard from traditional rulers, the local government and representatives in the House of Assemblies. Some suspects have been arrested in the past, but we don’t hear anything about them,” he added.

He said, “On May 30, at about 4.30pm, the police received information that one Israel Olusanya and his family were found dead in their residence. A team of police detectives was mobilised to the scene. The team met corpses of the said Israel Olusanya, the wife and their children at the scene, while one other, named Tolu Olusanya, was met unconscious.

“On close examination, marks of violence were seen on the heads of the victims. The injured victim was rushed to the Ikorodu General Hospital for treatment, while corpses were deposited at the hospital’s morgue for autopsy. Investigation to unravel the perpetrators of the dastardly act has commenced.”

The cult had stormed a residence in Ibeshe, Ikorodu, in June 2016. The attackers killed a Ghanaian after raping her and inflicting injuries on her eight-month-old baby.

In July 2016, the assailants raped a 60-year-old woman, Francisca. They allegedly brutalised her daughter.

On October 21, 2016, the gang reportedly attacked a family in Oluwoye community, killing a pregnant woman, Afusat Yusuf. Her husband, Kazeem, and the couple’s two kids –Rodiat and Opeyemi – were injured.

On May 4, the suspected ritual killers wreaked havoc on a family of six in Adamo, Imota, in the Ikorodu area of Lagos State. They killed a couple­ ­– Taofiq Agbaje and Simiat Agbaje – and two of their four children, Rodiat and Toyeebat.