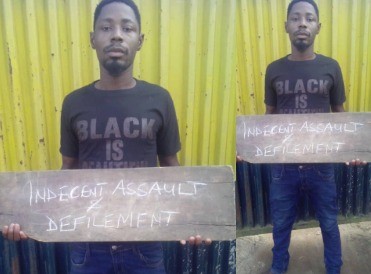 The Lagos state police command have arrested a Togolese national, Dominic Samson, for allegedly sexually assaulting a 15-year ld girl residing in their compound at number 28 Olusesan street in Ejigbo.A statement by the state police command spokesperson, Chike Oti, says the father of the victim, lodged a complain to the Divisional Police Officer in charge of Ejigbo Police Station, CSP Olabisi Okufowobi.Based on his complaint, the DPO, a female officer, with extensive training in  children and women rights, interrogated the victim and she confirmed the report. She confirmed that the suspect did not only defile her but sodomised her by having anal sexual intercourse with her. She further revealed that she was not the only victim of the suspect’s indecent sexual behaviour. She named five other victims who are within 13 to 15 years  age bracket.All the victim’s except the sixth had been identified, interrogated and their statements recorded. The girls revealed that the suspect sometimes brings all of them together in one room for an orgy and thereafter give them a cash reward of fifty Naira each. The five survivors had been taken to the Mirabel Centre where the Doctor’s report confirmed that the victim’s were indeed defiled as alleged. The CP Lagos  once again admonishes parents to be mindful of their children  as that is the only panacea to the rising cases of sexual exploitation and abuse of children.    The post Photo: Lagos police arrest Togolese national who sexually abused 13-15 year old girls by having group sex with them repeatedly appeared