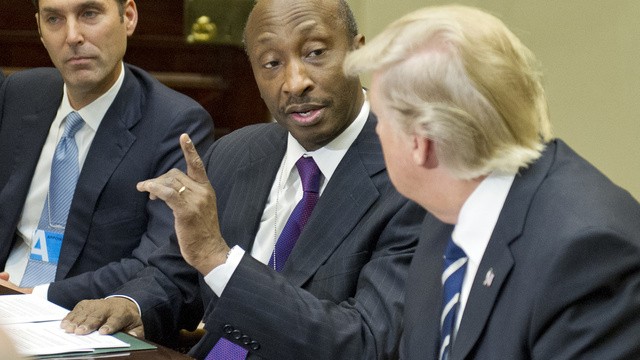 The organization is pressuring Nooyi to step down from Donald Trump’s business-advisory council after the president was slow to condemn white-supremacist violence last weekend in Virginia. Campbell Soup Co. CEO Denise Morrison, another Trump adviser, will be a target of the campaign as well, said Rashad Robinson, executive director of the group, which claims 1 million online members.

“We let Pepsi know about 24 hours ago that we would be moving forward on them,” Robinson said in an interview on Tuesday. “They are a public-facing company that talks openly about diversity. Their role on this business council is that of an enabler, and they are an enabler to Donald Trump — not just the policies but the practices that are putting folks in harm’s way.”

Get the latest on global politics in your inbox, every day.

Get our newsletter daily.

Pressure on Trump’s business advisers has mounted since Monday, when CEOs from Merck & Co., Under Armour Inc. and Intel Corp. all stepped down from his manufacturing council. CEOs from Dow Chemical Co., General Motors Co., General Electric Co. and Boeing Co., meanwhile, have indicated they will stay for now. Trump also tweeted on Tuesday that he has many leaders waiting to take the place of anyone who leaves.

“What we’re hoping is for these companies to stop, and desert, and leave this administration isolated,” Robinson said.

PepsiCo declined to comment on the Color of Change campaign, while Campbell didn’t immediately respond to requests for comment.

The criticism stems from Trump failing to quickly condemn white supremacists for deadly violence at a rally Saturday in Charlottesville, Virginia. Nooyi, 61, responded to the attacks with a tweet: “Heartbroken by the violence in #Charlottesville. Hate and intolerance are a betrayal of what we stand for as Americans.”

Though Nooyi was more vocal than many CEOs in addressing the controversy, Color of Change has said that the tweet alone doesn’t go far enough. Its members have begun targeting her on social media with the hashtag #QuitTheCouncil. The group was previously credited with limiting companies’ investment in the Republican National Convention last year.

This isn’t the first time Nooyi has faced backlash in the Trump Era, from both sides of the political spectrum. Two days after Trump’s victory in November, Nooyi spoke about the reaction of her family and employees to the election results.

“Our employees were all crying and the questions that they’re asking, especially those who are not white, ‘Are we safe?’” she said at an event sponsored by the New York Times. “I never thought I’d have to answer those questions.”

Though Nooyi stressed the need to be unified as a country, the comments got PepsiCo placed on pro-Trump boycott lists.

Nooyi, who was born in India, joined the president’s Strategic and Policy Forum on Dec. 14 and hasn’t spoken out against the administration since then.

At Campbell on Monday, a spokesman cited the importance of diversity and inclusion when explaining why Morrison was staying on Trump’s council.

“It continues to be important for Campbell to have a voice and provide input on matters that will affect our industry, our company and our employees in support of growth,” Thomas Hushen said.