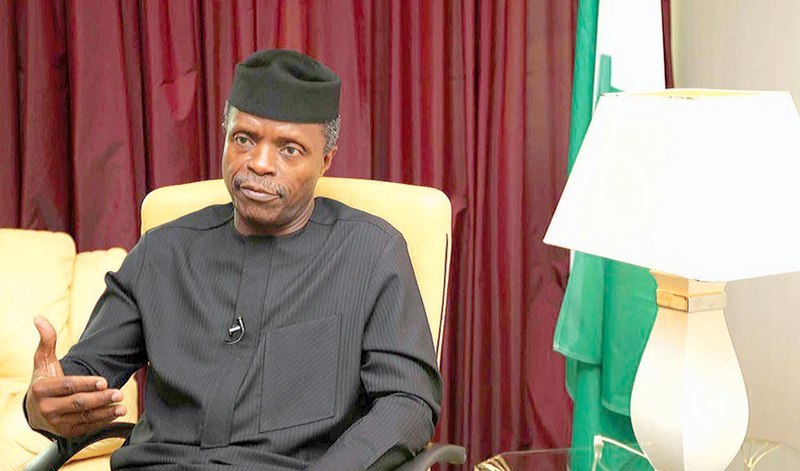 The Peoples Democratic Party, has commended Acting President, Yemi Osinbajo on steps he had taken to douse tension in the country occasioned by “hate speeches’’

Sen. Ahmed Makarfi, Chairman, PDP National Caretaker Committee, said at a news conference on Wednesday in Abuja, that Osinbajo deserved to be commended.

Makarfi, however, called on the government to build on the effort by making all sections to be viable and operate an inclusive government.

He advised the government to ensure that its programmes, policies and steps were tailored in a manner that no section of this country would have the impression that it didn’t count.

Makarfi also called on leaders and governments at all levels to handle emerging challenges confronting the nation in the best way possible.

According to him, the emerging challenges include insecurity in the North-East, herdsmen/farmers’ clashes, kidnappings as well as agitations and counter-agitations for secession.

He said that PDP believed that human and national development normally had challenges, but that “handling of such challenges determines the direction that the development takes’’.

“As a country and a people, we have faced several developmental challenges; some have been resolved while many others are yearning for resolution.

“Even after such resolution as it’s typical of the evolution of human societies, we should expect to be confronted by new and emerging challenges.

“It is thus the responsibility of each generation of our leaders to grapple with and handle such emerging challenges in the best way possible. It is always a work in progress,’’ Markafi said.

On herdsmen and farmers’ clashes, he said that while both groups had constitutionally guaranteed rights to existence, the government needed to come up with measures that would once-and-for-all address the issue.

“We must, however, be able to differentiate between the business of peaceful cattle rearing and criminal activities and take appropriate steps to protect lives and property.

“We must also secure our borders in order to prevent the influx of foreigners who may not respect the laws of our land.

“Of concern also is the issue of cattle rustling, which is also taking an altogether unprecedented dimension.

“This, unlike the pastoralists/farmers problem, is clearly an issue of criminality, which governments and security agencies need to wake up to, to reassure victims that the state is there for them also.’’

On kidnappings, Makarfi said it was worrisome that school students and teachers had become targets of the criminal act.

He said that the development underscored the urgent need for security agencies to “up their ante’’ in the fight against the scourge.

“Apart from additional funding, equipping and intelligence gathering, the capacity of the security agencies must be improved as a matter of priority as this will enable the nipping of this criminal activity in the bud.

“We, however, wish to commend the security agencies for the bursting last week, of a criminal gang of kidnappers which had brought untold hardship and anguish to several Nigerian families.

“It is our hope that this feat is just the start of series of efforts to not only bring this criminal enterprise to an end but also bring the perpetrators to justice. ‘’

Makarfi also urged the security agencies and the judiciary to ensure that criminals faced the full wrath of the law.

He said that PDP believed that in any democratic space, allowance must be made for people to express grievances and agitate for the redress of such.

He added that while PDP had no problem with agitations, those calling for succession should respect the rights legitimate rights and dignity of other citizens.

The chairman described recent altercation which degenerated into the issuance of ultimatum and counter-ultimatum for some Nigerians to leave certain parts of the country as an ill-wind that blew no good.

“Hate speeches either coming from the North, South, East or West must be avoided and be condemned by all of us.’’

Makarfi, however, prayed for President Muhammadu Buhari, and wished him quick recovery.