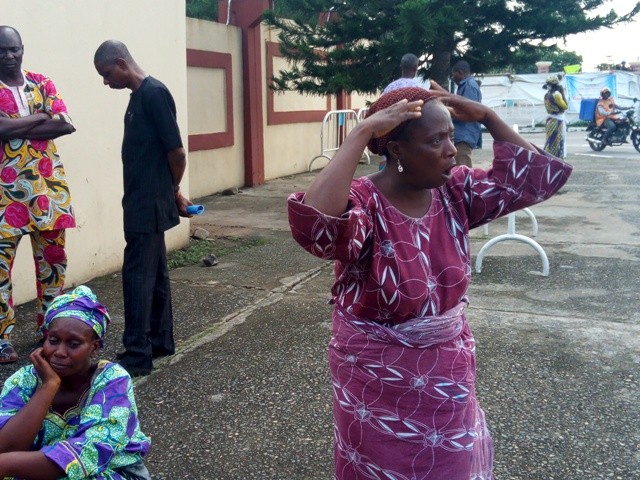 Activities at the Lagos House, Ikeja, was paralysed for a few hours on Wednesday as parents of kidnapped pupils of the Lagos State Model College, Igbonla, Epe, protested against the alleged indifference of the state government towards the plight of the pupils who had spent 14 days in kidnappers’ den.

The protesters refused to leave Governor Akinwunmi Ambode’s office, demanding the rescue of their children with immediate effect.

One of the victims’ (Isiaka’s) mother was inconsolable, as she demanded the release of her son.

Another parent, Toyin Philips, mother of 17-year-old Pelumi, another victim, was seen weeping.

“If I have the money they are demanding, I would not have sent my son to that school,” she said.

Spokesperson for the parents, Mr. Dapo Adesega, lamented that their children had been with the kidnappers for 14 days and the state government had not communicated with them.

“If we had not come here today, we wouldn’t have heard anything from the government.

“The kidnappers said we could not speak with our children again. They said four of them were ill. We want government to help us,” he said.

Another parent, Moruf Ramon, said there was no way they could raise the N100m being demanded by the kidnappers, adding that so far, the parents offered to give the kidnappers N10m which they contributed, but they rejected it.

Folami said, “Work is going on and soon, your children will be released to you.”

Bamigbetan said government knew the pains the parents were going through and that everything would be done to get the children released soon.

Another Ambode’s aide, who declined to be identified, told our correspondent that the pupils would soon be rescued, adding that it was not proper for government to make its strategy public.

Meanwhile, the Lagos State President, All Nigerian Conference of Principals of Public Schools, Mr. Isaac Olatunde, said no effort would be spared in ensuring the return of the kidnapped pupils.

He said this during a prayer session organised by ANCOPSS at the Oregun Senior High School, Lagos.

More than 300 principals from the six education districts and 20 zones in the state attended the programme.

Olatunde said principals were worried about the continued stay of the pupils with their abductors, hence the resort to prayers.

He said, “The first time it took place, God intervened as fast as possible. This time around, it is taking too long and we are concerned. We appreciate that the state government is making a lot of efforts, but we want to complement the efforts with prayers. We are confident that our prayers have been answered and that these children have been released already.”

The Director General, Lagos State Office of Quality Assurance, Mrs. Ronke Soyombo, commended the principals and assured them that the state government would secure the release of the pupils.