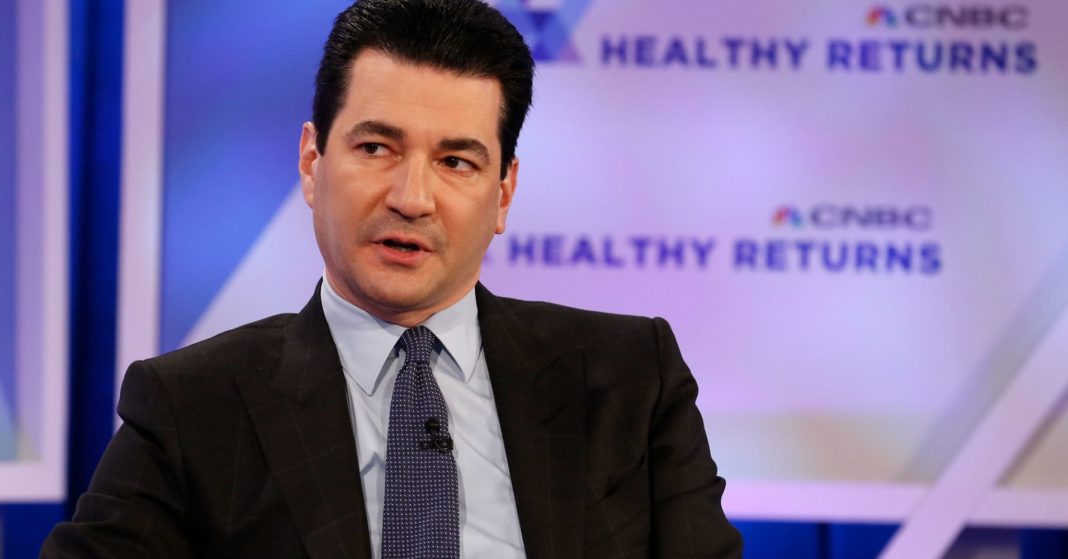 For the last two years, Scott Gottlieb missed a lot of time with his wife and three daughters — back-to-school nights, school plays and parent-teacher conferences.

He loved his job running the Food and Drug Administration, but hated leaving his wife Allyson, nine-year-old twins and five-year-old in Connecticut every Sunday to head to Washington, DC. Leaving work on Fridays was also hard. Allyson would tease him about how he wouldn’t want to leave D.C. at the end of the week, but didn’t want to leave his home in Westport, Connecticut on Sundays either.

Gottlieb said he was used to traveling for work every week when President Donald Trump tapped him to be his FDA commissioner in March 2017.

The commute didn’t bother him so much until late last year when he was on a call with a U.S. senator and his other line kept ringing. It was his wife; she was hit by a car while walking in a strip mall parking lot and slightly fractured her knee. He flew home that day, but there was no quick way to get to her between the flight and hour-long drive home from the airport.

“It put a bigger weight on me in terms of feeling disconnected and far away and not being there,” said Gottlieb in an interview. “There was a fear that, God forbid, if something happened and I need to be home quickly, I just couldn’t.”

Although he originally planned to stay at the agency through August, the accident helped put his priorities in order, he said. At the top of the list: spending the summer at home with his family.

That’s essentially what he told his staff when he resigned March 5; he wanted to spend more time with his family.

Usually, when an official of Gottlieb’s stature resigns in Washington or Wall Street, “spending more time with my family” is rarely the real reason. And his unexpected departure, just two months after denying plans to step down, fanned speculation that he was at odds with the Trump administration and forced out like so many other top officials over the last two years.

Not true, Gottlieb said in an interview at the agency’s Silver Spring, Maryland headquarters where his office bookcase is filled with family photos. Befitting for the nation’s top food regulator, who is also a medical doctor, the White House candy dish on his desk is covered with plastic wrap to guard against germs.

The 46-year-old still has a full career in front of him. He’s worked at the FDA multiple times, invested in health-care companies as a venture capitalist and written about health policy at the conservative think tank, the American Enterprise Institute. He denied knowing what he’s going to do next.

In his nearly two years at the helm of the FDA, Gottlieb advanced sweeping initiatives like making cigarettes minimally or non-addictive and approving generic drugs faster. He published roughly 175 commissioner statements and gave countless media interviews, helping raise the FDA’s stature and influence.

Just two weeks before Allyson’s accident, Gottlieb announced the FDA would seek to limit the sales of fruity flavored e-cigarettes. That is part of the biggest and controversial issues of his tenure: curbing epidemic levels of teen vaping.

He’ll step down before the policy is finalized or implemented. It’s one of a number of initiatives he advanced that he leaves unfinished. He says he would have liked the tobacco policies to be further along, though he’s “confident” they will get out.

Ned Sharpless, currently director of the National Cancer Institute, is filling in as acting FDA commissioner after Gottlieb’s last day, which is Friday.

Right now, the only future plans Gottlieb said he’s sure of: going to Disney World for spring break. (He let his daughters pick the vacation.)

“That last week is going to be hard. The first week after I announced, it was difficult,” Gottlieb said. “I was very emotional because in some respects, I’m walking away from the best job I’ll ever have. That’s hard to do.”

The night before Gottlieb announced his resignation, he called his old boss and friend, former FDA commissioner Mark McClellan.

“He said, ‘just make sure you’re ready to do this because there’s nothing like this. You’ll never have another job like this again,'” Gottlieb recalls him saying. “And I know that. I know enough to know that.”

He also called as many of his FDA colleagues as he could before announcing his resignation. When the Washington Post’s story broke, Gottlieb was sitting with two of his senior advisers in his office at the Health and Human Services Department headquarters. Their phones immediately started ringing.

Gottlieb said his predecessor Robert Califf warned him that it’s going to feel weird when his phone stops ringing the day after he leaves.

As for what comes next, Gottlieb said he has no idea.

“It’s the first time in my life I don’t know what I’m doing next,” he said. “I’m a doctor so I always had my next job planned out, but this is truly the first time I’m leaving a job and I do not have a job.”

The one job he said he’s looking forward to? Being a dad again.