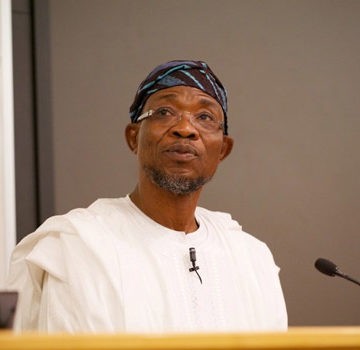 Governor Rauf Aregbesola of Osun State has called on Nigerians to condemn all forms or utterances and acts capable of disintegrating the country.

Governor Aregbesola spoke against the backdrop of hate speeches coming from different parts of the country, especially with regards to the notices to quit being served Nigerians by ethnic groups in different regions of the country.

Aregbesola made this call in his address entitled We have overcome, to mark the 26th anniversary of the creation of Osun State on August 27, 1991.

He enjoined citizens of the state in particular and Nigerians in general to eschew all forms of anti-social behaviours and discriminations based on faith and ethnicity, for the nation to move forward as a united entity.

He also issued a wakeup call to Nigerians to prepare for an impending economic revolution, which wind was blowing across the world in the form of recession and the ongoing global efforts to discover a “new world economic order without crude oil.”

Governor Aregbesola urged the people to be prepared both intellectually and spiritually to be able to stand up to the new development.

He averred that if the people unite, work assiduously, harness their God-given potentialities and pray fervently, the nation would overcome any challenge— economic, political or social.

He said: “We should practice tolerance in religion, ethnicity and ideology and abhor any form of hatred or discrimination against anyone different from us in any social category.

“We should remain strong, united, unbroken and unbreakable, in the spirit of togetherness.

“We should show kindness, love and generosity of spirit and of our substance to others’ needs. We must love our neighbours just like ourselves.

“An economic transition is in the horizon in which our national dependence on oil will end as we know it. We should all brace up for this development by preparing spiritually and intellectually, using our God-given endowment.

”Our faith in God and responsible use of our endowments will see us through. We will overcome any challenge we face. Our best is yet to come.”

He noted that the state must not depart from the path of greatness and development it was currently treading, stressing that people of the state should demonstrate virtues in all their dealings.