Not all youths are leaders of tomorrow. Some are looters in training- Apostle Suleman knocks young Nigerians who engaged in vote-buying in Ekiti gov election 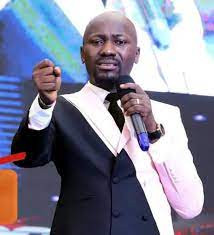 Videos of some young Nigerians showing off the money they ‘made during the election’ after allegedly selling their votes, made the rounds on social media.

Reacting to this development via his Twitter handle, Apostle Suleiman wrote;

”So in the just concluded Ekiti state election,some youths were selling their votes?.. I have always said it, not all youths are leaders of tomorrow,some are looters in training!.”