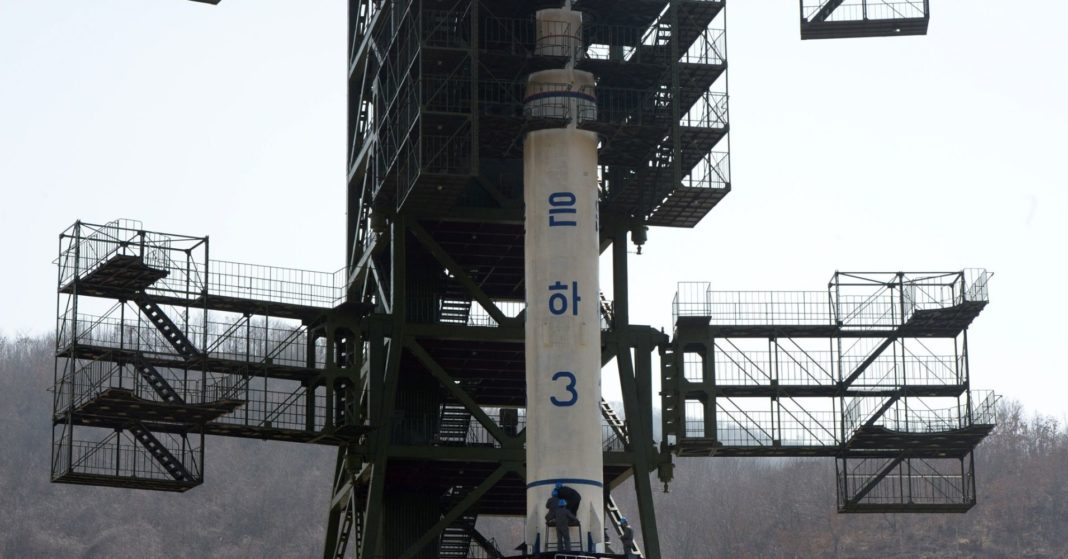 WASHINGTON — North Korea is pursuing the “rapid rebuilding” of the long-range rocket site at Sohae Launch Facility, according to new commercial imagery and an analysis from the researchers at Beyond Parallel.

Sohae Satellite Launching Station, North Korea’s only operational space launch facility, has been used in the past for satellite launches. These launches use similar technology to what is used for intercontinental ballistic missiles.

Beyond Parallel reports the activity at Sohae, photographed on March 2, is “evident at the vertical engine test stand and the launch pad’s rail-mounted rocket transfer structure.”

“The activity they are undertaking now is consistent with preparations for a test, though the imagery thus far does not show a missile being moved to the launch pad,” said Victor Cha, one of the authors of the report.

“The activity on the ground,” said Cha, “shows us that they do have a (nuclear intercontinental ballistic missile) capability that is not just developmental, but in the prototype phase. They’ve already tested a few of these and it looks like they’re preparing the launch pad for another act.”

After the first summit between the two leaders in Singapore in June 2018, North Korea began to dismantle some facilities at Sohae. “The facility has been dormant since August 2018, indicating the current activity is deliberate and purposeful,” the analysts said.

Other researchers have said that there has been continued low-level activity at the site in the interim, including an analysis from 38 North, which posted satellite photos from Oct. 31, 2018 showing new equipment being installed and “the continued presence and movement of vehicles” at several of the headquarters buildings.

The same day the satellite photos at Sohae were taken, President Trump touted his talks with Chairman Kim in Hanoi as “very productive,” saying the two leaders have “made great historic progress.”

“But I had to walk,” he said Saturday in a speech at the Conservative Political Action Conference. “Because every once in a while, you have to walk, because the deal wasn’t a deal that was acceptable to me.”

The president, however, said “the one thing we have, though, is we have no testing, no missiles going up, no rockets going up. No nuclear testing.”

He said that before he started talking to Kim: “Mountains were being — these are big mountains. They were being shoved over three, four inches. People thought it was massive earthquakes, then they found out, no, that was nuclear weapons — nuclear testing. So much.”

“We’ve made a lot of progress,” Trump said. “In fact, when I came home, they put out a statement that, actually, they were willing to do much less on the sanction front. But you see, that’s not what happened there.”

At a news conference in Hanoi after the summit, Trump said he and Kim discussed the dismantling of Yongbyon, and that the North Korean leader expressed a willingness to dismantle it.

“He would do that, but he wants the sanctions for that,” Trump said. “There’s plenty left after that. And I just felt it wasn’t good,” he said, adding, “That facility, while very big, it wasn’t enough.”

“We had to have more than that,” he said.

Trump said he wanted Kim to take steps on other elements of North Korea’s program that the U.S. had discovered, including a second uranium enrichment plant.

“And we brought many, many points up that I think they were surprised that we knew,” he said.

Secretary of State Mike Pompeo said that “even the Yongbyon facility and all of its scope — which is important, for sure — still leaves missiles, still leaves warheads and weapons systems. So there’s a lot of other elements that we just couldn’t get to.”

Trump has questioned U.S. intelligence on North Korea’s ballistic missile program since the early days of his presidency, according to former FBI Director Andrew McCabe. McCabe wrote in a new book that during a briefing with intelligence officials in July 2017, Trump expressed doubt about their assessment that North Korea was capable of reaching the U.S. with a ballistic missile. Trump told the officials that Russian President Vladimir Putin told him North Korea doesn’t have such capabilities, and that he believes Putin, according to McCabe.

Trump has sharply criticized McCabe, saying his book is littered with lies.

During his news conference in Hanoi last Thursday, Trump appeared to question the intelligence on North Korea again. Asked about North Korea expanding its nuclear and ballistic missile programs in recent months, Trump said “some people are saying that and some people aren’t.”