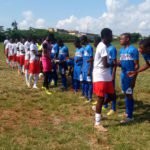 A hat-trick by Fagbolade Praise and a brace from Toriola Moses ensured Lagos State representative, Ijaye Housing Estate defeated their counterpart from Ondo State, Saint Daniel International College 5-0 in the Day 1 of the zonal preliminaries of the 2017 NNPC/Shell Cup held at the Ijebu Muslim College in Ijebu-Ode Zone on Wednesday.

The Coach Adeshina Yusuf led side who won the last edition of the GTBank Governors Cup made known their intention of adding the NNPC/Shell Cup trophy to their cabinet by dominating the game from the blast of the whistle till the end of the game.

In a chat with NationSport after the encounter, hat-trick hero, Fagbolade said his main aim is to help his side qualify for the quarter final of the competition.

“I am very happy to score four goals today because I didn’t expect score such amount of goals.

“Though I feel I can score like 10 goals in this competition, my major objective is to help my school to qualify from this zone to the next stage of the competition,” he told NationSport after the encounter.

In earlier match decided at the center,

Coach of Hensen Demonstration School, Chinedu Uba expressed satisfaction with the performance of his players.

“It was a wonderful performance from my team and I will tell them not to let the result gets into their head because we still have a long way to go. We will continue to work hard and pray that we qualify from this center,” Uba told NatioSport.

In the last match at the center, Islaudeen Middle High School, Osun State failed to take advantage of their numerical advantage by losing 1-0 to nine-man Community High School, Akwa Ibom.

Ekiti vs Delta 9am

Kwara vs Oyo 9am

Kogi vs Ondo 11am