Next presidents, replacements for Soyinka, Clarke, others’ll be products of Ijaw Academy – Dickson 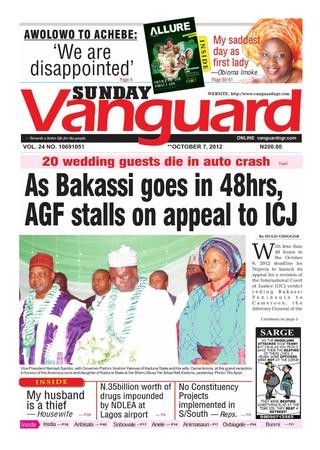 Bayelsa state Governor, Seriake Dickson has said that the Ijaw National Academy, a world standard bastion of learning newly built in the state, will produce future Nigerian presidents, governors and better replacements for academic bulldozers like the Nobel laureate, Professor Wole Soyinka, Elder statesman, Chief Professor Edwin Clarke and other national leaders and professionals whose contributions to Nigeria’s improvement have placed the country on the global map of development.

Gen. Yakubu Gowon and wife; Governor Seriake Dickson and wife and others during the commissioning of the Ijaw National Academy in Bayelsa state.

Governor Dickson stated this during the commissioning of the Academy situated in Kaiama local government area of the state.

According to him, “Few days ago I told you that your future is the most important thing entrusted in our care. Seated here are future presidents, future governors, army officers and industrialists who will manufacture and make new discoveries for our world.”

He said the Academy would produce “future professors, doctors, industrialists, senators” and other professionals “to replace the Nobel laureate, Professor Wole Soyinka, Professor J.P Clarke” and other big wigs in various professions of life whose contributions to national development have chatted many new courses for the country.

He said, “…all the investments we are making here is to equip you with the skills and the capacity to fly as high as you can to conquer the world.”

Governor Dickson however urged the students to be dedicated, hardworking and be a people of service to the nation because that is what Bayelsa stands and is known for.

Also speaking at the occasion is the Former Head of state, General Yakubu Gowon who commissioned the Ijaw National Academy as well as the Off K Williamson Drive, a road named after the state’s late erudite professor, K Williamson, and leading to the Academy.

General Gowon who had in the previous day commissioned the newly built Bayelsa state Government building also harped on the important place of education to nation building.

He said he takes education very seriously because a formidable nation stands firm with education as its greatest pillar of support.

According to him, “My interest in Education knows no bound. To me, it is an honour and privilege to be invited here to commission these projects.  I am sure the nation is benefitting from all you (Governor Dickson) are doing here. You have given premium to education and we have seen the excellent work that you have been doing here.”

General Yakubu Gowon urged both the students of the academy, the people of Bayelsa and the entire nation to continue to support Governor Dickson in his educational developments so that Nigeria will have a wealth of learned professionals who will always chart new and innovative causes for the country.

Speaking particularly to the students, he enjoined them to ensure that they protect and defend the school and it’s values so that many years to come, their future generations will know that they kept a promise of ensuring that education remains a paramount pillar that they can lean on.

Earlier, former Federal Commissioner of Information and South- South leader, Chief Edwin Clark said that the academy will grow to be one of the best institutions in the country.

The elder statesman also said that Governor Dickson has transformed the state and especially the capital, Yenegoa so much so well that at first, when he entered the area, he really thought he was in Abuja.

While thanking the Governor for investing so much in education, Chief Clarke also urged all Bayelsans both at home and abroad to support the governor in ensuring that the state’s education becomes a Mecca where every parent would love to send their children for learning.

“We are here today to commission this academy. I am in total support of those that said without education, there will be no development.”

He urged all Bayelsans saying, “Whether you are in APC, PDP…private individual at home or outside, use your leadership positions to bring everybody together to build our state.”

He said the lack of quality education had placed the state at a marginalised position and urged that more investments be made in the educational sector of the state.

The Academy is built at a location adorned with natural terrain of peaceful atmosphere away from the city’s bustle to make the students really focused in acquiring all the knowledge they need.

The over two thousand (2000) capacity school located at Kaiama, according to Governor Dickson, “is one out of the fifteen boarding schools I have started with” and it is equally equipped with modern facilities like the library and laboratory facilities.

The Governor said being the drive of his administration to raise a new generation of leaders, a new generation of farmers and also a new generation of families, the academy and other schools he has and is still building are equipped with modern library, laboratory as well as all other facilities that are of international standards to ensure that the students of Bayelsa and indeed any other person who seeks quality education in the state will access and be truly made in the society.

Other facilities in the academy that were commissioned were the Governor Dickson’s Auditorium, the Chief E. K. Clarke Administrative Block, as well as the inspection of standard students’ hostels with bore hole, underscoring Dickson’s mantra that “the development of state education is anchored on capacity building.”

Also, apart from his investments in education, Governor Dickson believes that an environment with the best educational facilities on ground is meaningless without the maximum security of lives and property. Hence, the Governor established the State’s Security Operation Center, fully equipped with modern technology at its Control Room to amplify security of the state.

The security network of the state is so formidable especially with emergency response unit and dedicated call line, 07006464644, which has 10 other backup lines for individuals to call if in any security emergency.

Indeed Governor Seriake Dickson has kept to his promise to the people of Bayelsa when he declared a state of emergency in education by making the state’s education a primus inter pares among its competitors in the country.