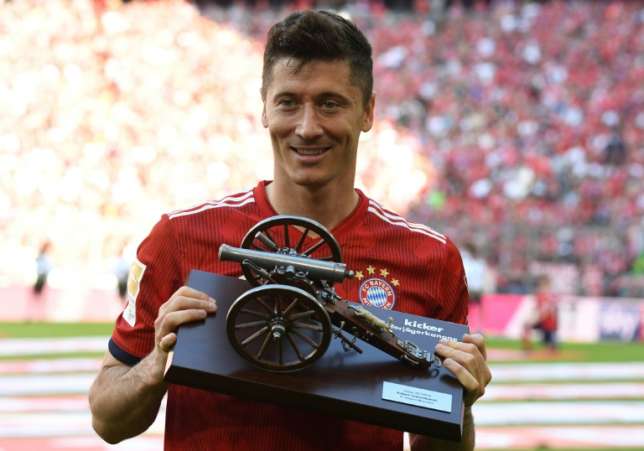 “Robert feels that he needs a change and a new challenge in his career,” Pini Zahavi told the weekly.

“The managers of Bayern know about it.”

Lewandowski, 29, whose Bayern contract runs until 2021, has been linked with Real Madrid while Qatari-backed Paris Saint-Germain and Premier League giants Chelsea and Manchester United are also understood to be interested.

He was the Bundesliga’s top scorer in the just-completed season with 29 goals, the third time he has won the trophy after success in 2015/16, also with Bayern, and 2013/14 while at ex-club Borussia Dortmund.

In late February, the Poland international parted ways with his previous agent of 10 years, Cezary Kucharski, and signed up with Zahavi, one of the most powerful agents in world football.

Zahavi said that “Robert’s motivations are not money or a specific club, because almost all top clubs would like to sign up the world’s best striker.”

“Everyone in the Bayern club leadership has their own great career to look back on. They should understand his situation,” he told Sport Bild.

However, Bayern’s bosses have made it clear that Lewandowski will play for them next season.

Rummenigge told Kicker magazine earlier this month that Bayern fans “do not have to worry about Robert Lewandowski and the relationship with Bayern… We have a very good one.”

“We know what we have in him and I’m very happy that we still have such a long-term contract,” added Rummenigge.

“There’s no need to worry, he’ll play here in Munich again next year.”

Magazine Kicker also pointed out that Bayern’s senior bosses have repeatedly informed Lewandowski that there is no possibility of leaving before his contract expires.