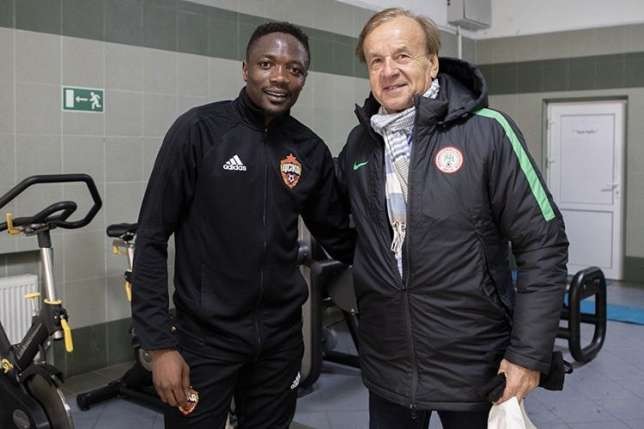 Rohr has included Musa in the squad for all his games so far for the Super Eagles.

Super Eagles boss Gernot Rohr paid a visit to one of his players Ahmed Musa in Moscow where he plays for CSKA Moscow.

Rohr is keeping an eye on his players and visiting his players in Europe before naming the squad for the upcoming friendly games against Poland and Serbia.

One of his first stops was to visit Musa, a player that has been a consistent name in his squad.

“Words cannot express the gratitude I am feeling for what you did. I appreciate your generosity,” Musa wrote on his Instagram along with some photos of he and Rohr.

“What did I ever do to deserve you? You are amazing!A great teacher inspires and you have inspired me to excel in the game of football.

“I stumbled and failed but you taught me to never give up and keep on trying. I just want to say THANK.. THANK FOR THE VISIT.”

Musa has featured prominently in the Super Eagles under Rohr and was in the squad for all of the 2018 FIFA World Cup qualifying games.

In Fact, the 25-year-old has been in the squad for all of the Super Eagles games under Rohr.

Rohr visits the forward at CSKA Moscow where he just joined on loan from Leicester City.