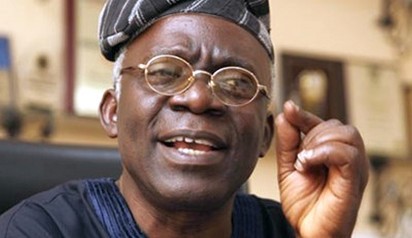 Human rights lawyer, Mr. Femi Falana (SAN), on Tuesday, faulted the claim that a Federal High Court in Abuja had, last year, affirmed the power of the National Assembly to increase budgetary estimates submitted to it by the President.

Falana was the plaintiff in the suit in which Justice Gabriel Kolawole delivered the judgment cited by the federal lawmakers that the power of the National Assembly to alter the executive’s budgetary estimates had been recognised by the court.

Also, another Senior Advocate of Nigeria, Mr. Chijioke Okoli; Mr. Norrison Quakers (SAN), Emeka Ngige (SAN) and Prof. Kanyinsola Ajayi (SAN) faulted the contention of the federal lawmakers that the National Assembly had the right to introduce projects into the budget prepared by the executive.

Okoli, Quakers, Ngige and Ajayi described a situation where the legislators would alter the appropriation document in such a way that the executive would not be able to implement the budget as anomalous.

Falana explained in a statement on Tuesday that Justice Kolawole never granted any power to the National Assembly to increase budgetary proposals.

He said, “In the entire 22-page judgment, the learned trial judge never said the National Assembly has the power to increase any budget proposal submitted to it by the President.

“On the contrary, the Federal High Court made it categorically clear that the National Assembly lacks the legislative powers to prepare ‘budget estimates’ for the President or ‘disregard the budget proposals laid before it and substitute it with its own estimates’.”

He stated that despite dismissing the suit on the grounds that he, the plaintiff, lacked the locus standi to institute it, the court concurred with the submissions he canvassed in the suit.

Falana added that he had initiated an appeal to challenge the dismissal of the suit.

“Even though I have taken the legal battle over the dismissal of the case to the Court of Appeal, I wish to state, without any fear of contradiction, that the learned trial judge concurred with my submission that the Constitution has not vested the National Assembly with powers to increase the budget,” he said.

Falana added, “The incontestable statement has since been twisted to give the very erroneous impression that the power of the National Assembly to increase the budget has been judicially recognised.

“With respect, the summary of the decision of the Court by the National Assembly is grossly misleading.”

Quoting the relevant portions of Justice Kolawole’s judgment, Falana said by acknowledging that the National Assembly was not a rubber stamp parliament, the court recognised  the duty of the legislature “to debate and make its informed inputs” into the President’s budget proposals.

He contended that nowhere in the judgment did the court say “that the National Assembly has the power to increase or insert new items, like constituency projects, into the budget estimates contained in any Appropriation Bill or Supplementary Bill prepared and submitted to it by the President.”

According to him, sections 13 and 18 of the Fiscal Responsibility Act No 31 of 2007, have addressed the lacuna in Section 81 of the Constitution which provides for how the National Assembly should handle the executive’s budgetary proposal.

He noted that the Fiscal Responsibility Act mandate the minister of finance to seek inputs from the National Assembly and other relevant statutory bodies in the preparation of the Medium Term Expenditure Framework.

Falana insisted that the National Assembly could not prepare any aspect of the budget estimates, lay it before itself, pass it and ask the President to sign it.

The SAN stated, “And pursuant to Section 18 of the Act, the Medium Term Expenditure Framework shall be the basis ‘for the preparation of the estimates of revenue and expenditure to be prepared and laid before the National Assembly under Section 81 of the Constitution’.

“It is submitted that it is at the stage of preparing the Medium Term Expenditure Framework that the members of the National Assembly may influence the introduction of new items or inclusion of projects to be executed in their constituencies.

“Therefore, the National Assembly cannot prepare any aspect of the budget estimates, lay it before itself, pass same and then request the President to sign it into law.

“Finally, to ensure that the preparation of the Appropriation Bill is based on the Medium Term Expenditure Framework, passed by the National Assembly, signed into law by the President and implemented by the Executive arm of government Section 51 of the Fiscal Responsibility Act has specifically clothed every citizen with the necessary locus standi or legal capacity to enforce the provisions of the law by obtaining prerogative orders or other remedies at the Federal High Court, without having to show any special particular interest.”

The senior advocate added, “In justifying the dismissal of the suit, his lordship said the reliefs sought in the case qualified me to be described as a ‘meddlesome interloper’!”

Another SAN and a former Chairman of the Lagos Branch of the Nigerian Bar Association, Mr. Chijioke Okoli (SAN), described the National Assembly’s act of increasing the budgetary estimates submitted to it by the executive arm of government as anomalous.

In a telephone interview with one of our correspondents on Tuesday, Okoli said the legislature had no business introducing new projects into the budget.

He also challenged the executive arm of government to approach the Supreme Court for a definitive interpretation of the relevant provisions of the law.

Okoli added, “What we have in Nigeria is anomalous situation where parliamentarians see themselves as executive officers; it does not happen anywhere.

“In the United States of America, where we copied this from, what obtains is that senators and representatives bring to bear their influences on the executive to have the projects they are interested in in their constituencies, put in the budget.

“Prof. Ben Nwabueze, who is an authority in constitutional law, has taken that point before and said the legislature had no business tinkering completely with the budget.

“They can say ‘this price is too much’. They have no business in introducing new projects; that is an executive function.

“I think the problem too is with the executive. I would want the executive to make bold its threat. The executive should go to the Supreme Court for a definitive interpretation of these things.”

He traced the history of the act of the legislature tinkering with the budget to the days of the David Mark as the Senate President.

The SAN stated, “Some of us were adults when (Shehu) Shagari was the President, we didn’t have this rubbish.

“It started when David Mark became the President of the Senate. Because the President, Umar Yar’Adua’s election was massively rigged, the Senate, in particular, became overbearing on the executive and former President (Goodluck) Jonathan came in with his problems. Because he wasn’t assertive, the National Assembly began to take more than its fair share and now claiming executive functions.”

Also, another senior advocate, Mr. Norrison Quakers, said the National Assembly had no legal basis to either insert new figures or items that were not in the budget presented before it for approval by the executive.

He added that even when there was a need to make any alteration, the lawmakers needed to engage with the executive.

“Let’s say for instance, if there is a need to review the allocation to the Ministry of Power, there’s a need for an interface between the minister and the National Assembly, not for the purpose of inserting a figure or an item that was not provided for. That’s the law and the law on that is very clear.

“Can they review? Yes. If, for instance, I present a budget of say N10, it can either be reviewed upwards or it can be slashed after the defence of the budget because the budget must be defended anyway.

“But it is not right for the National Assembly to introduce items that were not presented before them into the budget. If I didn’t defend an item before you, why will you include it in the budget that I presented?”

Another SAN, Prof. Kanyinsola Ajayi, described as dangerous a situation where the National Assembly would review the budget to render certain projections in it unrealistic or not implementable.

According to him, such a situation is against the principle of separation of power.

In his own reaction, Chief Emeka Ngige (SAN) stated that the federal lawmakers were not empowered to initiate new projects into the budget.

Ngige said, “They do not have power to initiate totally new projects outside what is contained in the appropriation bill. That is the responsibility of the executive arm of government.

“But what the legislature is saying is that they will just insert a project, for instance a cottage hospital in their village; assign a certain amount there, for instance N30m.  Who has done the evaluation prior to that time? No body. Who has called for the contract? These are the issues.

“There is no doubt that the legislature has the power to alter but not in the sense of what they are doing now by inserting fresh items into the budget or removing projects sub-heads from the appropriation bill.

“If for instance, government budgeted N100bn for the Second Niger Bridge, they can bring it down to say N80bn if they discover that it is inflated, but they cannot say they will make it N200bn because they do not have the facility to do that.

“In reducing any amount proposed in the budget, they should carry the executive along. Since most members of the National Assembly and ministers belong to the same party, they can have their party meetings where they can present and discuss projects they want to be reflected in the budget and send them to the executive. Even members of the opposition can send theirs through the principal officers of the National Assembly.”

On the ongoing faceoff between the National Assembly and the Minister of Power, Works and Housing, Mr. Babatunde Fashola, where the minister complained about the reduction in the amount proposed in the budget for key projects, Ngige argued that the lawmakers were wrong.

Also, Prof. Fidelis Oditah (SAN) argued that the process of passing a budget was just like passing any other executive bill, saying the National Assembly had power to review the budget in a sensible way.

Oditah added, “If there is an executive bill, is the National Assembly not entitled to make changes and introduce new provisions into such an executive bill? Why then should the provision in relation to the budget be different?

In his reaction, another SAN, Chief Mike Ozekhome, said the National Assembly was right to review the budget estimates submitted to it by the executive since it was not a mere rubber stamp.