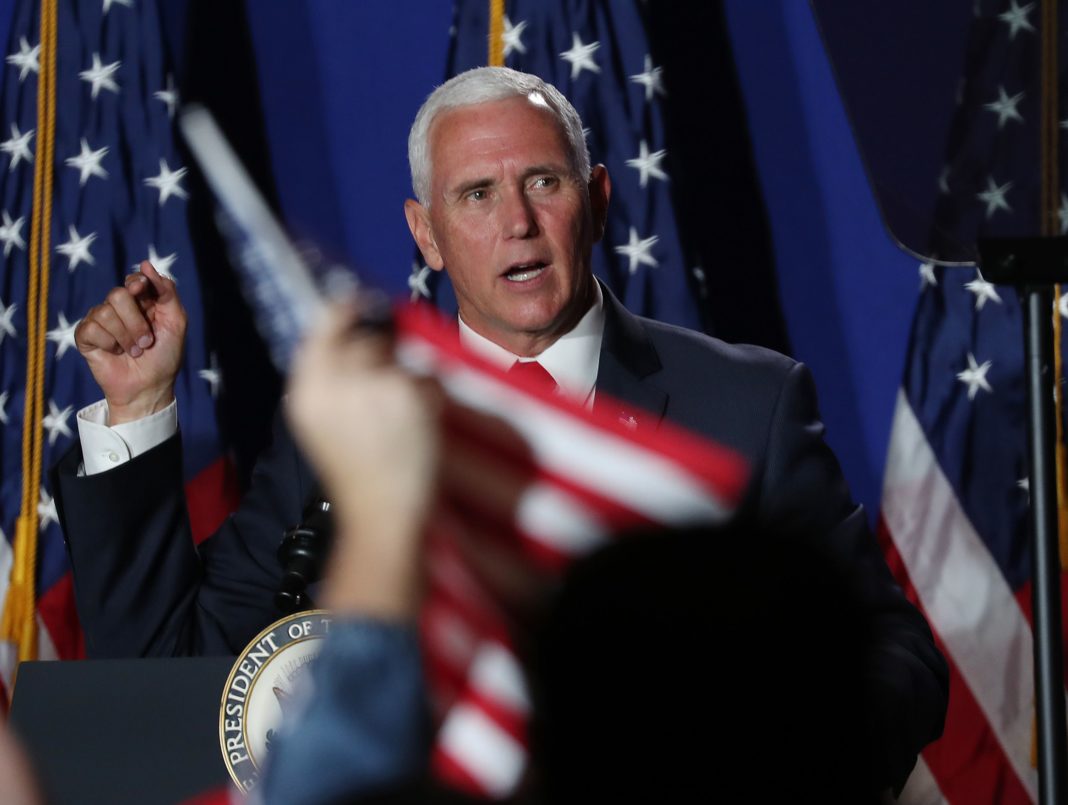 A group of men detained behind chain link fencing shouted to news cameras, “No shower, no shower!”

Pence said afterward that what he saw was evidence of a “system that was overwhelmed.”

The experience did not appear to temper a statement he made earlier in the day that reports of mistreatment, filthy conditions and lack of basic necessities were “slanderous.”

The vice president, flanked by Sen. Lindsey Graham. R-S.C., and officials from the Department of Homeland Security, repeated the words, “the crisis is real,” in referring to illegal border crossings and legal asylum claims at the border.

“But what’s not real,” he said, “is the slanderous allegations of heartless mistreatment by Customs and Border Protection. I can see it in your eyes, I can hear it in your voice, about the care and concern.”

The remarks were made during a roundtable discussion held after Pence toured a temporary holding facility near Donna-Rio Bravo International Bridge in Texas.

At the 1,000-capacity facility in Donna, Texas, most of the detainees were lying on mats on the floor. The location held about 800 migrants.

“I couldn’t be more impressed with the compassionate work that our Customs and Border Protection are doing here at this border facility,” Pence said.

He said President Donald Trump sent him so “the American people could see what’s happening here.” A reporter on the tour was not allowed to speak to children or adults being held.

“It’s time we moved past the harsh rhetoric of the American left,” Pence said at the roundtable held in McAllen.

He refuted the description, used by U.S. Rep. Alexandria Ocasio-Cortez and other Trump critics, of detention facilities as “concentration camps.”

At the Donna facility, he sought to discredit reports and photographs of poor conditions at federal migrant facilities, including accounts of children sleeping on concrete benches or living without soap or toothpaste.

“Every family that I spoke to told me that they are being well cared for,” he said.

Pence bolstered his claim by asking a group of migrants at the Donna facility, likely Spanish speakers, if “they’re taking good care of you here.” Most nodded.

Hope Frye, a San Francisco immigration attorney who said she has toured all the federal migrant facilities in the Rio Grande Valley, was adamant that conditions have been deplorable.

“The idea that this is false or exaggerated is really offensive to me,” she said. “It’s like saying migrants’ voices are untrue. It all paints the same picture — depraved indifference to the safety and welfare of children who come to us and are put in our care.”

DENVER, COLORADO – JULY 02: Protestors in front of the Byron G Rogers Federal building. #CloseTheCamps United We Dream, American Friends Service Committee, and Families Belong Together led protests across the country at members of Congress’s offices to demand the closure of inhumane immigrant detention centers that subject children and families to horrific conditions. Constituents delivered a letter asking the members to visit a detention facility this week, stop funding family detention and deportation, and use all their powers to close the camps on July 02, 2019 in Denver, Colorado. (Photo by Tom Cooper/Getty Images for MoveOn.org Civic Action)

In May, the Department of Homeland Security’s Office of Inspector General wrote an internal report stating that conditions were so bad at an El Paso, Texas, border facility, where about half the migrants in custody were sleeping outdoors, that agents there feared possible rioting.

Pence acknowledged there was overcrowding at some detention facilities, but he argued that it was simply more evidence the government faced a true crisis at the border.

At the roundtable, Homeland Security and U.S. Border Patrol officials recounted stories of “recycled children” used by migrants in attempts to gain entry to the United States, false asylum claims and sick migrant children rescued and cared for.

South Carolina Republican Graham called U.S. Border Patrol agents “every bit” the patriot that U.S. soldiers fighting overseas are. “I don’t know what we pay you,” he said, “but it’s not enough.”

Like Pence, he laid overcrowded conditions at detention facilities, filled in part with families fleeing poverty and gang violence in Central America, at the feet of congressional Democrats.

“The problem we have here can be fixed, literally overnight,” Graham said.

He sought support for his own legislation that seeks to force asylum seekers to apply for American safe harbor at home, immediately deport unaccompanied minors and increase detention time for migrant children.