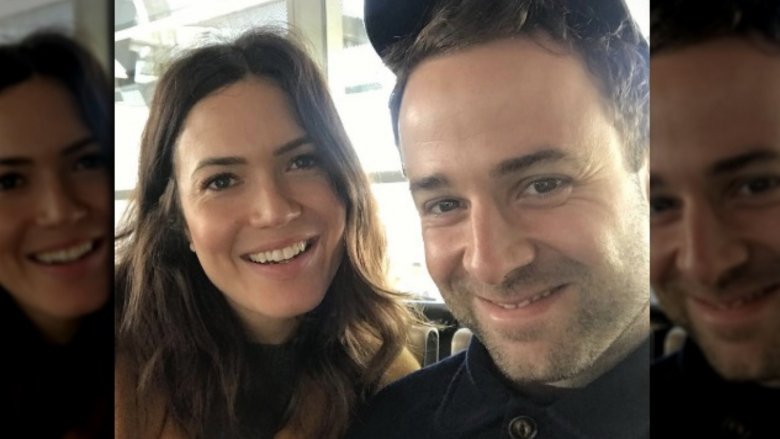 This Is Us star Mandy Moore and her fiancé, Dawes singer Taylor Goldsmith, have tied the knot!

E! News reports that Moore, 34, and Goldsmith, 33, got married in “an intimate backyard wedding” at the former pop star’s Los Angeles home on Sunday, Nov. 18, 2018. Described as “very boho” by a source, the ceremony was small, especially by Hollywood’s standards, and had “about 50 people” in attendance, many of whom were family members and close friends.

According to E! News‘ insider, there were “rugs on the floor surrounding the altar” and floral arrangements were “beautiful with lots of large feathers.”

Following Moore and Goldsmith’s nuptials, the newlyweds and their guests went to the Los Angeles event space The Fig House to continue on with the festivities. Moore’s This Is Us co-stars Milo Ventimiglia, Chrissy Metz, and Sterling K. Brown were reportedly among the event’s guests, as well as Friday Night Lights star Minka Kelly and That ’70s Show alum (and Moore’s ex-boyfriend) Wilmer Valderrama.

Rather than share one big wedding cake with their guests, Moore and Goldsmith reportedly had 12 different cakes for people to choose from.

Given Goldsmith’s career in music, it should come as no surprise that he took time to perform at the reception.

As Nicki Swift previously reported, news that Moore and Goldsmith got engaged after two years of dating broke in September 2017.

That October, Moore opened up to People about her then-future wedding, and she revealed that she wanted a small ceremony. “I don’t think I’m going to have a big, old affair,” she told the magazine. “So think it will be small and quiet and private.”

Noting that she was “lucky” that she can “get dressed up” and “be the center of attention” in her acting career, she added, “I’ve never dreamed of emulating that in my real life. So I think I’ll probably take the opposite route when it comes to getting married.” Sounds like she did just that.

Moore’s wedding with Goldsmith marks her second trip down the aisle. She married singer Ryan Adams 2009 before later divorcing in 2016 (via Entertainment Tonight).