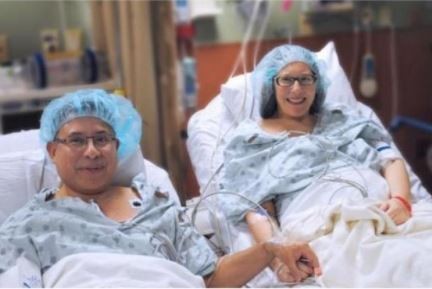 A husband celebrating his 23rd wedding anniversary gave his wife a life-saving gift: a kidney. With it, Cesar Calle gave his wife Monica a life free of painful dialysis treatment, which she needed for polycystic kidney disease she had been fighting for a decade, the Sun Sentinel reported.

The couple spoke about the five-hour surgery during a press conference from Memorial Regional Hospital in Hollywood, Fla., where the surgery was performed on Feb. 19. “I feel like a million dollars,” Monica said, three weeks after the transplant.

“And I think I look like a million bucks, compared to before.” Selflessly, her husband, Cesar, offered to donate one of his kidney’s to his wife, and in December the couple got word that he was a match.  Dr. Juan Arenas, a surgeon and chief of the hospital’s Memorial Transplant Institute said, “To find a match between spouses is very unusual but very lucky for us to be able to find that.”

According to the Sun Sentinel, Cesar said, “For me to do this, it was big. I was shocked. I thought it’s not real, this is not happening.” As she celebrates her wedding anniversary, Monica reflected, “Little did we know 23 years ago that this was going to be the angel to save my life. I felt like I just won the lottery.

I started dreaming of what my future would look like, not having to do dialysis. The fact that I can actually travel now and not worry about carrying boxes with me or supplies, or worry if it’s gonna get lost. I felt so free.”