Lawns gone wild: Why you might just have to learn to love dandelions 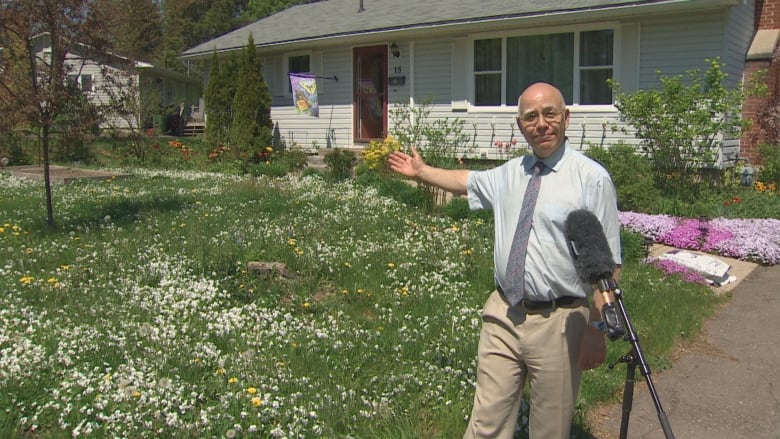 That means your lawn is either a sea of beautiful golden crowns or a hotbed of yellow disaster.

You’re either sitting on your deck enjoying a cup of coffee or kneeling on your lawn and yanking the invaders out by the fistful — or paying someone to banish them for you.

In other words, you’re either on Team Nature or Team Turf War. It all depends on your mindset, and lately, that mindset appears to be shifting.

Bee colonies have been struggling. Pesticides have come under renewed scrutiny. Homesteading movements, driven in part by pandemic stay-at-home orders, have encouraged people to get back to nature.

And this year, No Mow May, a campaign created by U.K.-based Plantlife and adopted by the Nature Conservancy of Canada, has sought to convince Canadians it’s OK to let their lawns grow wild.

Residents are asked not to mow their lawns for the entire month in an effort to help pollinating insects, including butterflies and bees, whose food is in scarce supply in May.

With just one week of No Mow May left to go, the general consensus is this: It’s gaining ground, and life is certainly a lot simpler when you don’t try to fight nature.

So has the time come to embrace dandelions? We talked to experts and residents on both sides of the fence, and here’s what we found out.

Where the wild things are

“Have you seen my lawn?” Even in an email, the tinge of pride is evident when David Coon is asked for his thoughts on dandelions and No Mow May.

Coon, who is the provincial Green Party leader, is clearly walking the walk when it comes to the environment.

The front lawn of his Fredericton home is a riotous vista of wildflowers, grasses and dandelions.

“The idea of a No Mow May is a great gesture for people to do their part for the bees,” Coon said. “We have so many species in New Brunswick that are on the verge of disappearing.”

It also helps that he’s a big fan of the flowers that so many people seem to despise.

“I love dandelions,” Coon said. “When I was four years old, I was really, really ill … I was in my room in a basement apartment. When I was finally able to go outside, there were dandelions everywhere. So for me, they have a really positive connotation.”

We’re all appreciating our own backyards a little bit more and the wildlife that we live with.– Paula Noël, Nature Conservancy of Canada

Paula Noël is also knee-deep in the let-it-grow movement.

The New Brunswick program director for the Nature Conservancy of Canada has faithfully observed No Mow May — and she has the lawn to prove it.

The No Mow campaign has been around for a few years, she says, but this year it really caught on, with “an explosion of people talking about it and sharing it and taking up that challenge.”

Noël said she thinks that’s partly because of the COVID-19 pandemic.

“A lot of us have spent a lot more time at home in the last year,” she said. “We’re all appreciating our own backyards a little bit more and the wildlife that we live with.”

How we learned to loathe them

Noël isn’t sure when dandelions became the outcast of the landscaping world but figures it probably started in the 1950s.

“During the Depression and war years, people ate dandelion greens because they were free and available and are in fact very nutritious,” she said.

“After the Second World War, dandelions were associated with the poverty and hardship of those years, so this is part of the reason they became reviled. Campaigns by herbicide companies [in the 1950s and ’60s] probably played a big part, too.”

At around the same time, the rise of suburban communities spawned a cultural tradition of having a well-kept front lawn, and peer pressure took it from there.

But in recent years, several factors have begun shifting that thinking.

Mounting evidence of climate change has heightened our concern for the environment.

Reports of an alarming decline in the world’s bee colonies — with disease, loss of habitat and pesticides all taking some of the blame — have put a laser focus on anything that can harm them.

Meanwhile, anything that provides sustenance to bees is suddenly being encouraged, and that includes dandelions.

“They’re one of the first foods of the season for pollinators,” Noël said. “They’re not damaging in any way to the environment, and the insect that we see most on them at this time of year is the honeybee.”

Many municipalities and school districts have moved away from spraying public properties, choosing instead to let nature take over.

“We’ve never sprayed them in recent memory, and there’ve been no complaints,” said Aaron Kennedy, communications director for the Town of Quispamsis. “We just let them grow, and they are plentiful for sure.”

Considering this tapestry of events, No Mow May was a campaign whose time has come.

“People are looking for things they can do to make a difference to protect wildlife, to protect the environment,” Noël said. “And this is an easy thing that people can [do] to help in their own little corner of the world.”

Rob Walker can barely eke out a spare 15 minutes to chat about dandelions. He’s too busy helping his customers get rid of them.

Walker is the Saint John area manager for Weed Man Maritimes. He’s worked in the field for 17 years and says if No Mow May is taking root, he’s not seeing much evidence of it.

“No, not a lot,” he said. “People still want their lawns to look good.”

If you’re one of those people, Walker has some tips on how to get and keep your lawn (mostly) weed-free.

The first and most important thing is to get that grass thick and healthy. “If the dandelion seed can’t touch the soil, it can’t grow,” Walker said.

If you’re determined to banish almost every dandelion, you’re going to have to go the herbicide route.

Once you’ve got your lawn thick and green, get ready to accept the fact that you will occasionally see a few dandelions and other weeds on your lawn, Walker says.

But for Noël, Coon and other New Brunswickers who have committed to No Mow May, there are no limits.

“No Mow May is really about retraining our way of thinking,” Noël said. “I think it’s teaching people that it’s OK to have some of those yellow flowers adding some colour to the landscape this time of year.”

‘Don’t drink at bedtime’ and other useful dandelion tips

A dandelion by any other name

The French word for dandelion is pissenlit, which translates to “pee the bed.” Not coincidentally, dandelions are a powerful diuretic.

Waiter, there’s a dandelion in my mesclun

You might have eaten dandelion leaves without even realizing it. Store-bought mesclun is a mix of tender, young salad green leaves that can include leaf lettuce, arugula, endive, frisée, oak leaf, radicchio, sorrel, chervil and, yes, dandelion leaf.

Go forth and multiply

That fluffy white dandelion seed head can contain up to 172 seeds. But that’s just a start: The plant blooms repeatedly through summer, and each plant can produce as many as 5,000 seeds in a single year.

Number one with a pull-it

Pulling dandelions the wrong way will turn one plant into a many-headed hydra. It fractures the root system underground, and each piece of those fractures will now turn into a dandelion — with multiple leaves and four or five different stems, all of them with flowers.

I’ll thank you not to call me a weed

The dandelion is a flower, with the scientific name of taraxacum. It is native to Eurasia and has been widely introduced to North and South America and other continents.