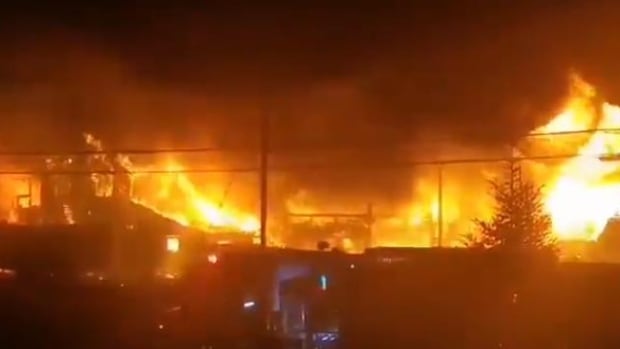 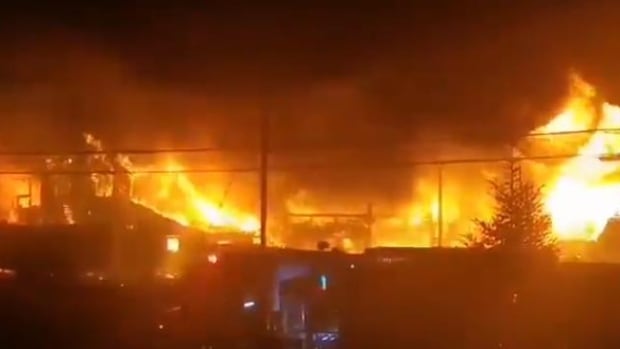 Videos posted to social media show a large fire and clouds of billowing smoke coming from the building.

Eel Brook Fire Chief Jonathan LeBlanc told CBC News that fire crews responded to a fire at a “large commercial structure” at 1065 Highway 335 at around midnight.

“When we arrived, the building was fully involved and was beyond saving at that point,” he said. “So we immediately went to trying to protect the exposures in the other buildings nearby. Eventually we did get things under control and contained, but the building was levelled.”

LeBlanc said eight fire departments and between 80 and 100 firefighters were on scene. He said the West Pubnico fire department stayed behind to monitor the situation and ensure the fire doesn’t pick back up again.

No injuries were reported and LeBlanc said there is no way at this point to determine the cause of the fire, given the extent of the damage.

LeBlanc did not confirm the fire was at the pound, but Sipekne’katik Chief Mike Sack confirmed in a text message to CBC early Saturday morning that “it’s the one in Pubnico that some of our people were dealing with.”

RCMP spokesperson Sgt. Andrew Joyce confirmed that police were also at the scene. He said if the fire is deemed suspicious, police will investigate it alongside the fire marshal’s office.

In a tweet, Assembly of First Nations National Chief Perry Bellegarde said his office has reached out to the RCMP and the federal government to “express First Nations’ deep concern.”

“I demand a full and thorough investigation by the proper authorities,” he said.