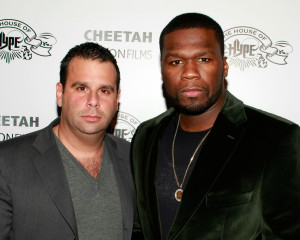 Lala Kent’s fiancé, Randall Emmett, headed to the hospital with chest pain amid the couple’s feud with 50 Cent.

According to a text message conversation posted by the rapper on Instagram on Friday, April 26, the movie producer was having health issues as their disagreement — over Kent and money — escalated.

“I said I’m sorry fofty [sic] I’m heading to emergency room Im not doing well Please don’t text me anymore,” Emmett, 48, wrote according to the screen grab. “This is too much for me I’m so hurt and not feeling well Now my ex is f–king with me after your post this is very bad for me on all levels going to er to make sure not having heart attack. Please fifty no more.”

As Us Weekly previously reported, the Vanderpump Rules star, 28, and the “Candy Shop” rapper, 43, got into a NSFW exchange on Instagram over the story of how she and Emmett first got together. 50 Cent posted a video of Kent telling costar Stassi Schroeder that Emmett sent her a car after “the first night we banged.”

The rapper, who starred in and coproduced the series Power with Emmett, captioned the video, “10 seconds left in the 4 quarter hoe’s are Winning. Do you want A range rover, yes, bitch yassss. Then just run out and suck a d–k. LOL smh.”

Kent — who got engaged to Emmett in September 2018, less than a year after they went public with their relationship — fired back in comments with, “She swears she’s a thug from south side Jamaica queens & she’s up in here watching Bravo. Someone has forgotten where they come from. Coming for me on the gram!? I smell fish coming from fifty’s direction.” 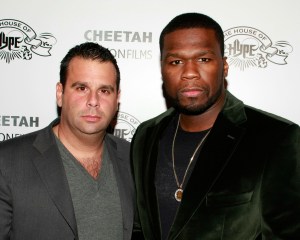 50 Cent claimed in his post that Emmett owes him a million dollars and he wants “the rest” of it by Monday.

In a second post on Friday night, he shared a screen grab of another text message exchange with Emmett, in which the Hollywood honcho said of Kent, “She is my fiancé and I asked you to be in My wedding last week.”

He added in a caption that Emmett “sent me 250k today but I want all my money Monday,” adding, “if he ain’t got it he can put his Rolls Royce on the truck to NY.The friend s—t is over rated.”

On Saturday, April 27, the rapper shared a photo that showed the producer taking a selfie at an awards show as 50 Cent stood in the background and wrote, “look at this fool taking selfies, you better get me my money fool.”