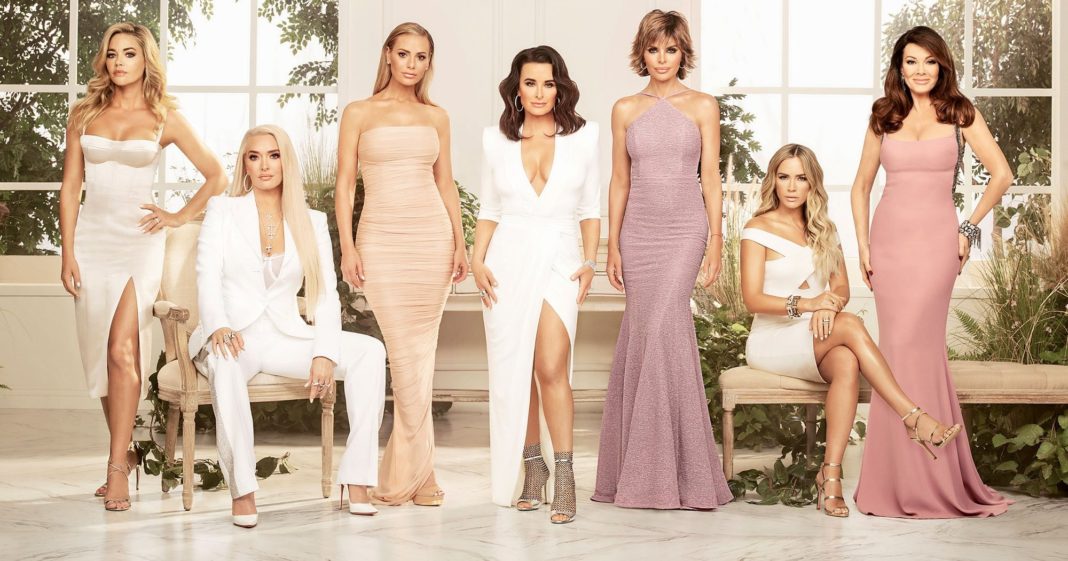 Kyle Richards and her Real Housewives of Beverly Hills costars are mocking Lisa Vanderpump and her husband, Ken Todd, with the Goodbye Kyle challenge on Instagram.

The catchphrase, which is going viral, was kicked off by Richards, 50, who yelled the phrase outside Vanderpump’s L.A. restaurant SUR on Friday, April 5 in a video on her Instagram Stories. “I’m going to have a goodbye Kyle on the rocks,” she joked before her friends and even her driver parroted the words.

She was making fun of Todd, 61, who had shouted the same words at the former child star after she got into a heated argument with the couple at their home. The fight, which was filmed months ago, aired this week on the hit Bravo show.

The trio got into the explosive disagreement over PuppyGate, which blew up after Dorit Kemsley adopted a puppy from Vanderpump Dogs that subsequently ended up being surrendered to a kill shelter.

Erika Jayne also shared her own video on Friday that showed her and her friends yelling “Goodbye Kyle” in a car.

Rinna, 55, then shared her own version that showed her husband, Harry Hamlin, and her mom, Lois, saying, “Goodbye, Kyle.”

Teddi Mellencamp also posted a video repeating the words, and Richards shared a video of her daughters saying “Goodnight, mom,” in the same tone.

While some have found it funny, other fans have criticized the reality stars for what they see as bullying.

“I love u Kyle but isn’t this kinda mean?!” one fan wrote.

Richards previously told Us Weekly that she was “very shocked” that Todd screamed at her. “I was not attacking, I was just speaking my truth and that reaction was just so extreme that I was very taken back,” she told Us.

Vanderpump, 58, wrote in her Bravo blog last month that her relationship with Richards was “finished.”