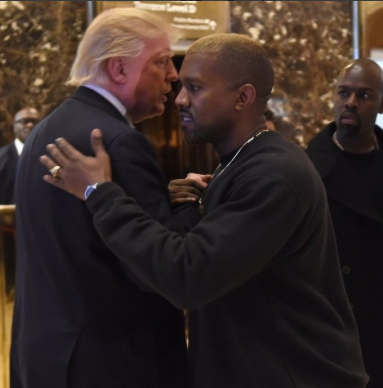 Kanye West has just released a new song to defend his support of US President Donald Trump.

In spite of the backlash he faced from friends and fans for declaring his love and support for Trump, Kanye has refused to back down. If anything, he has doubled efforts to defend his support for the controversial US President.

In a track titled Ye vs. The People feat. TI, Kanye argued with TI about his support for Trump.  The song acts as a political debate between the two rappers. TI represented the people who disagree with Kanye. He took Kanye to task over his support of Donald Trump and Kanye defended his decision to support Trump.

Defending his position, Kanye says he is ultimately “aligning with love”, but T.I. explains that his actions are selfish because of his huge impact on his fans and also that Trump’s political agenda stems more from hate than love.

But Kanye stands his ground, insisting that he’s “fighting for the people”.

Alluding to a photo he posted of himself wearing Donald Trump’s famous Make America Great Again baseball cap, West raps: “Wearing the hat will show people that we are equal.”

“You gotta see the vantage point of the people,” spits back T.I. “What makes you feel equal makes them feel evil.”

Kanye refused to be swayed during the argument, so they ultimately could only agree to disagree.

Check some of the song’s lyrics below.

Kanye: You just readin’ the headlines, you don’t see the fine print / You on some choosin’-side shit, I’m on some unified shit.
T.I. : It’s bigger than your selfish agenda / If your election ain’t gon’ stop police from murderin’ niggas, then shit...
Kanye: Bruh, I never ever stopped fightin’ for the people / Actually wearin’ the hat’ll show people that we equal.
T.I. :You gotta see the vantage point of the people / What makes you feel equal makes them feel evil.

Kanye: I know Obama was Heaven-sent / But ever since Trump won, it proved that I could be President.
T.I. : Yeah you can, at what cost though? / Don’t that go against the teachings that ‘Ye taught for?
Kanye: Yo, Tip, I hear your side and everybody talk, though / But ain’t goin’ against the grain everything I fought for?
T.I. :Prolly so, Ye, but where you tryna go with this?
It’s some shit you just don’t align with and don’t go against

Kanye: See that’s the problem with this damn nation / All Blacks gotta be Democrats, man, we ain’t made it off the plantation.
T.I. : Fuck who you choose as your political party / You representin’ dudes just seem crude and cold-hearted / With blatant disregard for the people who put you in position / Don’t you feel an obligation to them?
Kanye: I feel a obligation to show people new ideas / And if you wanna hear ’em, there go two right here / Make America Great Again had a negative reception / I took it, wore it, rocked it, gave it a new direction / Added empathy, care and love and affection / And y’all simply questionin’ my methods.

TI : What you willin’ to lose for the point to be proved? / This shit is stubborn, selfish, bullheaded, even for you / You wore a dusty ass hat to represent the same views / As white supremacy, man, we expect better from you / All them times you sounded crazy, we defended you, homie / Not just to be let down when we depend on you, homie / That’s why it’s important to know what direction you’re goin’ now / ‘Cause everything that you built can be destroyed and torn down.

Kanye: You think I ain’t concerned about how I affect the past? / I mean, that hat stayed in my closet like ’bout a year and a half / Then one day I was like, “Fuck it, I’ma do me” / I was in the sunken place and then I found the new me / Not worried about some image that I gotta keep up / Lot of people agree with me, but they too scared to speak up

Listen to the son below.