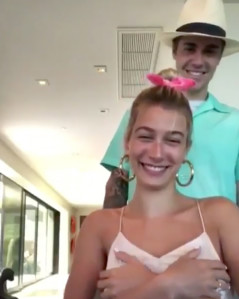 He’s smitten. Justin Bieber made a cameo in his wife Hailey Baldwin’s Instagram Live chat on Sunday, March 31, singing, kissing her and teasing her for wearing a sheer top.

The model, 22, was promoting Roxy’s newest collection in the chat but found it a little difficult to concentrate as the singer, 25, kissed her several times and hand-fed her almonds. 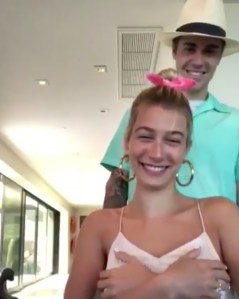 “I love you more than anyone,” she replied.

At another point in the live stream Bieber broke into song, serenading his musical director Dan Kanter. He also joked that his wife’s hair bow made her look like “that girl with her bow,” JoJo Siwa (who he’d previously shaded on Twitter). “No, I don’t,” Baldwin replied.

As she waited for Kelia Moniz to join the Instagram Live, the Drop the Mic host continued to chat with her husband, who she wed at a NYC courthouse in September after a two-month engagement.

“You look cute with your little earrings,” the “Love Yourself” singer told Baldwin.

“Big earrings,” she corrected him as he pointed to her camisole and added, “You can’t tell that this is see-through … you’re a naughty girl.” She then covered her breasts with her hands and laughed.

The cute show of togetherness comes days after Bieber slammed claims that he married Baldwin to get back at his ex-girlfriend Selena Gomez.

“Why would I dedicate my whole life to someone in marriage to get back at my ex,” the “Sorry” crooner wrote in a lengthy response to an Instagram commenter on Tuesday, March 26. “I absolutely loved and love Selena she will always hold a place in my heart. But I am head over heals (sic) in love with my wife and she is absolutely the BEST THING that has ever happened to me period.”

Bieber and Gomez had a long-running on-off relationship that began in 2011 and finally ended in March 2018, weeks before he rekindled a romance with Baldwin, who he’d dated from 2015 to 2016.