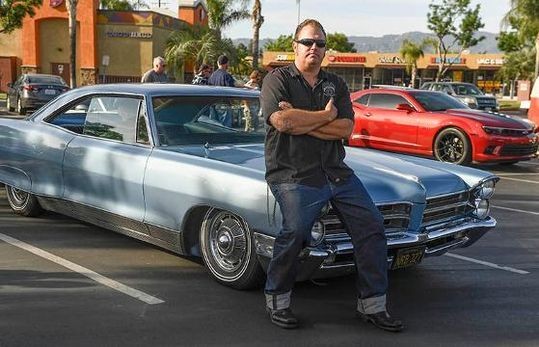 VALENCIA, Calif. — It’s long, low and wide — and Johnny Steur wouldn’t want it any other way.

Steur owns a cool 1965 Pontiac Bonneville, a two-door hardtop with a 389-cubic-inch V-8 and three carburetors. Bonnevilles, he says, were special.

“They had all the speed of a muscle car,” Steur, of La Crescenta, Calif., says.

Yet it’s immense. At 18-feet, 5-inches long, the Bonneville not only fits Steur’s lifestyle, but his 6-foot, 4-inch frame as well.

It’s not his first Bonneville. He says he had one when he was 19 and came to the current one about eight years ago. Not only does he enjoy it, but it’s a family affair has sons Adam, 4, and Thomas, 3, get a kick out of it, too, as we saw at a car show here recently.

The Bonneville, he says, was the pride of the Pontiac lineup in its day. But like many cars, Steur’s has a quirk: No backup lights. While the rest of the car might be deluxe, the original owner of his Fontaine Blue Bonneville wouldn’t spring $40 for a pair of backup lights.

No matter. In the case of this car, it only adds character.