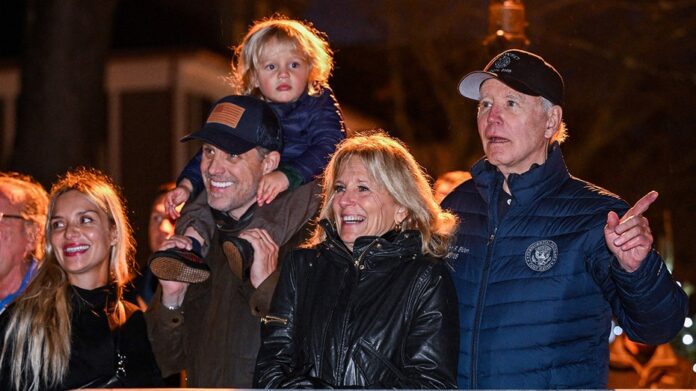 President Joe Biden and his son Hunter went shopping the day after Thanksgiving together, despite ongoing criticisms that the two have engaged in suspicious business deals with Chinese officials, a Ukrainian firm, and others.

The elder Biden, 80, and Hunter, 52, spent Friday on Nantucket, an island off of mainland Massachusetts, where they visited several shops. According to the New York Post, the president later had lunch without his son at Brotherhood of Thieves, a bar and grill located on Broad St.

The casual outing likely does little to assuage Republicans who claim the two have conspired in pay-to-play business dealings that allegedly traded access to the White House in exchange for enormous personal wealth to the Biden family.

The Bidens have denied any wrongdoing and the president has gone as far as to deny coordinating business deals with his son.

Republicans have promised to launch their own investigation of the Bidens’ business relationship when they retake a majority in the House of Representatives — and the power of investigative authority — next year.

As recent as this week, Sen. Ted Cruz, R-Texas, called President Biden “the Godfather” of the Biden business empire and called on Republicans to pursue him, not just Hunter.

“It’s not about the poor schlub who got caught. It’s about the boss,” Cruz said on an episode of his podcast, “Verdict with Ted Cruz.”

As for any Republican investigation, Cruz advised: “The focus needs to be on Joe Biden, this is not about Hunter Biden.”

“And now when he’s President of the United States, personally enriching himself enriching his family by selling official favors to enemies, hostile foreign governments — that is an issue of highest importance,” the Texas Republican claimed.

At a press conference last week, Rep. James Comer, R-Kentucky, said the House oversight committee that he will helm in January 2023 will subpoena testimony and evidence to “evaluate whether this president is compromised or swayed by foreign dollars.”

He added: “President Biden is not going to let these political attacks distract him from focusing on Americans’ priorities, and we hope congressional Republicans will join us in tackling them instead of wasting time and resources on political revenge.”

Democrats currently control a majority in the House and have chosen not to investigate the alleged wrongdoing. They do, however, continue to investigate former President Donald Trump.