Jenelle Evans’ Husband David Eason: I ‘Get Along’ With My Wife’s Mom Now 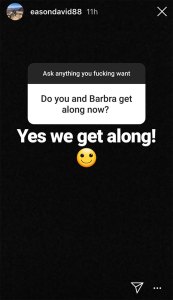 A commenter wrote in to a Q&A session Eason, 30, hosted on Instagram Stories on Thursday, December 6, to ask if the Teen Mom 2 alum and his mother-in-law ‘get along now.”

“Yes we get along!” the former reality star replied with a smiley face emoji.

It’s a far better outlook than the one Barbara, 65, gave fans at the Teen Mom 2 reunion special in August. “I don’t feel Jenelle is OK,” Barbara said at the time of her daughter’s partner. “I’m just so so so worried … I’m going to be the first one shot ‘cause I live closest. It scares me. He could come over and kill me any time.”

“Whatever makes him happy,” the MTV star captioned the Instagram shot. 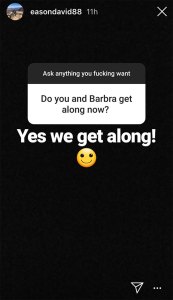 Jenelle also shared a smiling snap of herself with her formerly estranged mom at the end of November. “#MotherandDaughter yoga class today!” she wrote. “It went really well and now inspired to continue yoga, but my mom said she’s going to the Senior Citizens class instead.”

The TV personality addressed rumors that she and Eason were on the rocks on Tuesday, December 4, after the couple unfollowed one another on social media.

“Lmafo Married couples have disagreements but that doesn’t mean they are ‘splitting up’. #RUMORS,” she wrote on her Instagram Story on Tuesday.

The duo made headlines in October after the Read Between the Lines author called 911 and accused her spouse of assaulting her. “My husband, he just assaulted me,” she said in audio obtained by Radar Online. “He pinned me down on the ground in the yard, and I think I heard my f–king collarbone crack and I can’t move my arms.”

She later told E! News that the incident had been a “drunk and dramatic” misunderstanding.

Evans and Eason wed in September 2017 at their home in North Carolina after two years of dating.