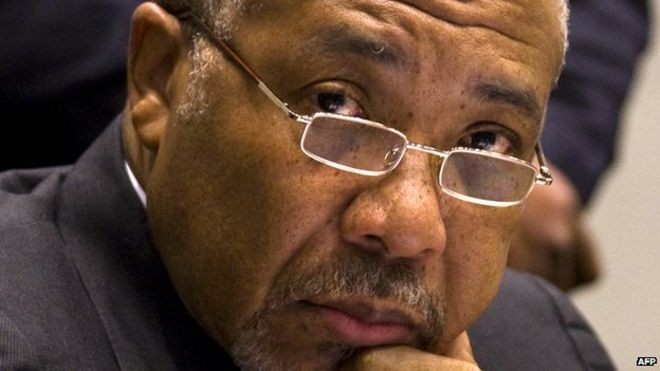 The ex-wife of convicted Liberian president Charles Taylor denied committing ‘allegations of rape and torture’, a court heard on Saturday.

During the Liberian Civil War Reeves-Taylor is said to have allowed the torture of seven women in Gbarnga, Liberia, at the HQ of Taylor’s National Patriotic Front.

Reeves-Taylor arrived in Britain as an asylum seeker in 1999. The court heard she denied ‘any involvement’ in the crimes she was accused of

She appeared at court supported by her brother to face four torture charges, but only spoke to confirm her name and address.

Karen Jones, prosecuting, said: ‘She does not admit the allegations that have been made and denies any involvement at all.

The conflict ended when a final peace agreement led to the election of Taylor as President of Liberia in 1997.

In 1999 Reeves-Taylor, a mum-of-two daughters, arrived in Britain as an asylum seeker and was working as a senior lecturer in business at Coventry University.

In 2012 the UN Security Council lifted sanctions against her and 16 other Liberians linked to the former president.

The asset freezes and travel bans were imposed more than a decade ago in a bid to weaken Taylor while he was in power.

He was jailed by a UN-backed court in 2012 for fueling Sierra Leone’s civil war.

Reeves-Taylor sat expressionless in the dock, wearing black jacket and a grey top in the dock.

The court heard she she denies ‘any involvement’ and was unaware of the what was happening.

Mr Olasoju, defending, said: ‘When she was arrested she was a senior lecturer at Coventry University, a head of department.

‘She is a home owner and has two daughters in this country and her brother is sitting behind me in court.’

The defense solicitor – who refused to give his first name – added: ‘She has been in this country for the last 18 years.

‘She claimed asylum in this country because she feared that those who were after her husband would be after her.

‘Charles Taylor and her got divorced in 1996. Since then she has lived outside of Liberia.’

Reeves Taylor, of Kitchener Road, Dagenham in east London, was arrested by the Metropolitan Police’s war crimes unit on Thursday.

She was refused bail and will next appear at the Old Bailey for a pre-trial in preparation hearing on June 30.

‘If you are convicted of such an offence you would receive a substantial term of imprisonment.’

Reeves-Taylor faces four charges, one of conspiracy to torture and three counts of intentionally inflicting severe pain or suffering.

One charge accused her of agreeing ‘with others unknown that a course of conduct would be pursued which, if the agreement was carried out in accordance with those intentions would necessarily amount to or involve the commission of the offence of torture.’

Three counts state that ‘as a public official or person acting in an official capacity together with others unknown at Gbarnga, Liberia, intentionally inflicted severe pain or suffering on an individual in the performance or purported performance of her official duties.’