IPOB to Okorocha: We can’t deceive millions of Biafrans 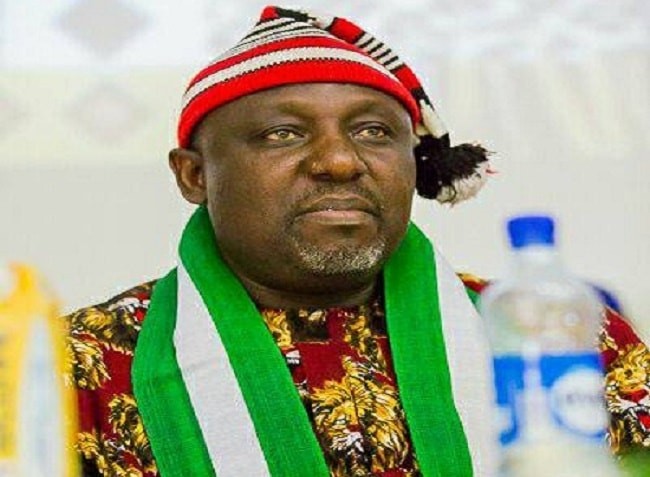 THE Indigenous People of Biafra, IPOB, yesterday reacted to the statement credited to the Imo State governor, Owelle Rochas Okorocha, that the organization and its leader, Mazi Nnamdi Kanu, were deceiving Igbo people, arguing that it was not possible to deceive millions of Biafrans. IPOB said:

“IPOB attention has been drawn to a publication credited to Rochas Okorocha, governor of IMO state through his Chief Press sec. Mr. Sam Onwuemeodo  on 14th Aug.2017 that Nnamdi Kanu and IPOB are deceiving Igbo with Biafra.”

In a  statement by Chinasa Nworu of its Directorate of State, IPOB reminded Okorocha that the struggle for the restoration of Biafra was a divine mission, adding that its members would not allow themselves to be distracted.

Nworu said: “Nnamdi Kanu and IPOB are not fraudsters or criminals, who acquired wealth through fraudulent means and illicit businesses before coming to power. Okorocha should know that we are fighting for freedom of our people and it is our human right to fight for freedom. It is also our right to seek for self determination.

“We are fighting for survival today in this contraption because the so called   leaders   have led us into slavery, death, economic marginalization   and other dehumanizing ways of living. It is unfortunate that when we talk about freedom through the ballot box, the likes of Okorocha would term it a call for war”

In a related development, the Arewa Youth Grand Alliance has accused the coalition of northern youths which issued a ‘quit notice’ to Igbos in the region, of blackmailing leaders of northern extraction into enlisting their support for a divided nation.

President of the alliance, Alhaji Inuwa Idris in a statement  Tuesday  in Abuja also faulted a youth group in Katsina state for disparaging the Emir of Katsina, Alhaji Abdulmumuni Usman as a result of his decision to protect Igbos living in his domain.

He said the attention of the alliance has been drawn to media reports by “one Mr Abdullahi Marusa, the Secretary General of Katsina State Progressive Youth Alliance where he spat on the revered Katsina Emirate by disparaging His Royal Highness, Alhaji Abdulmumin Usman and two prominent northern leaders; former Vice President Atiku Abubakar and Dr Usman Bugaje calling them ‘political opportunists.’ “

Idris continued: “the outburst of this young man is to say the least, incredibly callous, ridiculous and uncharitable, unbecoming of northern tradition where the youth hold leaders and constituted authority in high esteem.

Berating Okorocha on his style of governance since he mounted the saddle as the governor of Imo State, IPOB chieftain said: “For nearly eight years, Okorocha has served as a governor. Can he show to the public accomplished projects  that benefit the people in the state? We are not talking about building “roundabout” and trafficking Igbo youths to Turkey.

“Okorocha had made so much effort to sabotage the Biafra restoration for years and he always fails in every step   he takes   against IPOB. He played a major role in the arrest of our leader Nnamdi kanu in 2015 and he even boasted in public that Nnamdi Kanu will die in jail for trying to divide Nigeria.

“He paid millions of tax payers’ money to the media agents to blackmail Nnamdi Kanu and IPOB and saying that we are useless and irresponsible people and  now he is calling us deceivers.