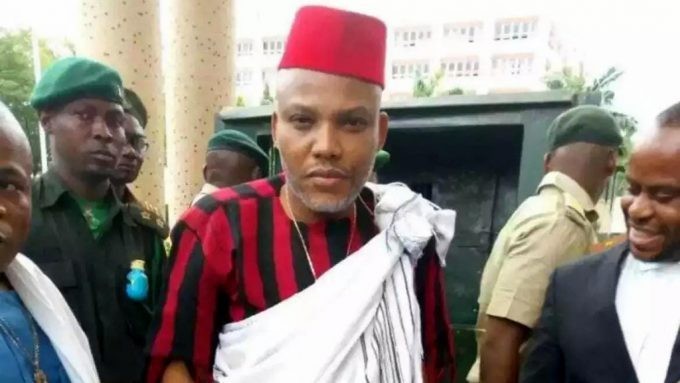 The Indigenous People of Biafra on Thursday berated the acting President, Prof. Yemi Osinbajo, for holding a South-East peace and conflict resolution meeting without involving its leader, Nnamdi Kanu.

In a statement in Awka, Anambra State, by its Media and Publicity Secretary, Emma Powerful, on Thursday, IPOB said those who attended the meeting had no major stake in the conflict intended to be resolved.

Osinbajo had on Wednesday held a meeting with leaders of thought from the South-East at the Presidential Villa, Abuja, where he warned those who had been engaging in hate speeches across ethnic lines in all parts of the country to always take into consideration that wars sometimes start with words and not necessarily with bullets.

IPOB, in the statement, faulted Osinbajo’s meeting and described it as of no effect.

It said “This meeting, we understood, was convened at the instigation of the Nigerian acting President, Prof. Yemi Osinbajo, following the political fallout from the hugely successful IPOB sit-at-home order of 30th of May, 2017.

“From time, we firmly resolved that nobody among the governors or politicians can set an agenda for IPOB except our leader, Mazi Nnamdi Kanu.

“Therefore, any meeting without the consent of our leader or those nominated by him in a representative capacity, is a complete waste and is unacceptable to IPOB.

“With one or two exceptions and with the greatest respect to the attendees at this Nigeria-sponsored gathering in Abuja, the so-called South-East delegation is in no way representative of the views of the leadership of IPOB worldwide, neither can they claim with any degree of sincerity to be speaking for the masses.

“Therefore, all that Professor Osinbajo has succeeded in achieving with this meeting is to waste scarce resources that could have been channelled towards more useful purposes.

“None of those that attended this meeting with Osinbajo gave the order for people to sit at home on May 30th. So, we are at a loss to understand the justification for their invitation to the meeting to discuss something they knew nothing about.”