In shadow of terror, Britons vote in key election 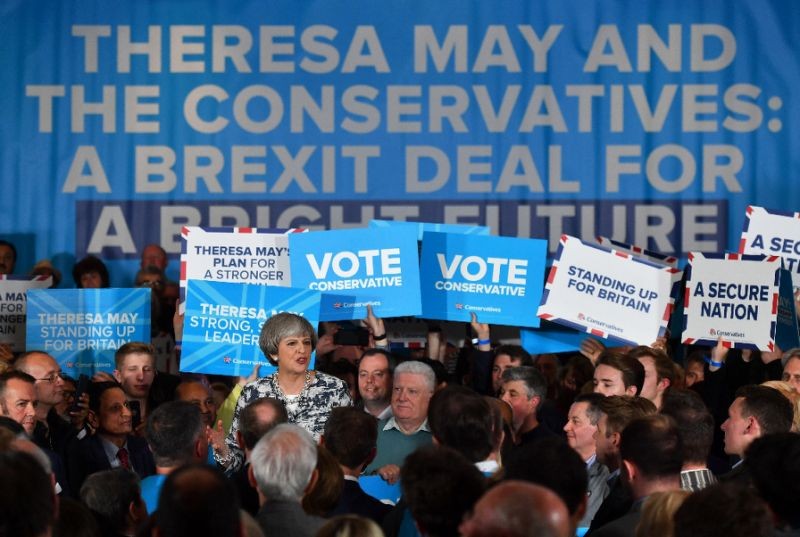 Britain went to the polls on Thursday for a snap election called by Prime Minister Theresa May ahead of Brexit after a campaign shadowed by terrorism.

May called the vote in April, when opinion poll ratings for her and her centre-right Conservative party were sky high, presenting herself as the strong leader to take Britain into Brexit talks.

But Islamist attacks in London and Manchester have put her under pressure over her six years as interior minister, while campaign missteps have dented her reputation as a safe pair of hands.

Meanwhile opposition Labour leader Jeremy Corbyn, an anti-war campaigner deemed unelectable by a majority of his own lawmakers, has run an energetic campaign, promising change and an end to austerity.

While May has been touring target seats around the country, delivering slogan-heavy speeches to small groups of hand-picked activists, Corbyn has drawn large crowds to open-air rallies.

Speaking to reporters on her plane during a final burst of campaigning on Wednesday, May insisted she had no regrets about calling the vote three years early.

“I’ve enjoyed the campaign,” she said. “There is a very clear choice for people when they come to vote.”

Corbyn, a 68-year-old leftwinger who has never held ministerial office and defied the odds to win the Labour leadership two years ago, urged supporters in Glasgow to think big.

“Wouldn’t it be great if on Friday we woke up to… a Labour government that will be a government for all of our communities across the whole of the country,” he said.

It is the third time Britain has gone to the polls in two years, twice for a general election and once for the EU referendum, and voter fatigue appeared to be an issue among the early voters.

“I don’t think it has really been a campaign, we don’t know anything about what they are going to do about Brexit, it’s been pointless really,” said Joe Kerney, 53, at a polling station in Hackney, east London.

“I have little confidence in anybody,” added voter Simon Bolton, 41. “I think we lack quality in terms of who we can choose, it is very limited.”

The election is May’s first since taking office after Britons voted by 52 percent to leave the European Union.

May has accused Corbyn of being unprepared for negotiations set to begin on June 19, and unwilling to curb mass migration — a key driver of the Brexit vote.

But her government’s record on cutting funding for health and education have also featured strongly in the campaign, to the benefit of Labour.

The Conservatives were also damaged by a manifesto plan for elderly care that would see some pay more.

Then came the suicide bombing at a Manchester concert on May 22, which killed 22 people including seven children, followed by Saturday’s knife and van attack in London, which left eight dead.

Campaigning was twice suspended in the aftermath of the attacks, which May blamed on “evil” Islamist ideology.

The Conservatives have always been strong on defence and security, and they have sought to exploit Corbyn’s anti-nuclear stance and his alleged past support for Irish paramilitaries.

But May also faced uncomfortable questions over cuts to police numbers during her time as interior minister, amid accusations that the attackers in Manchester and London Bridge had slipped through the intelligence net.

Security on voting day was reviewed following the London attack, with the city’s Metropolitan Police force implementing a “specialist and highly flexible operation” which it said could be deployed as needed.

Polling stations, many located in schools and community centres, opened at 7:00am (0600 GMT) and will close at 10:00pm, with 49.6 million registered voters electing a total of 650 MPs to parliament.

Overall turnout in the 2015 general election was 66.4 percent.

An exit poll will give an indication of the outcome, although final results will not emerge until early Friday.

As the Conservatives and Labour trade blows, the smaller pro-European Liberal Democrats and the pro-Brexit UK Independence Party (UKIP) have failed to gain much traction.