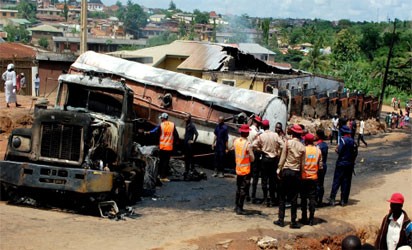 An 11-year-old boy, Chima Osuji, was on Saturday rushed to an emergency unit of an undisclosed hospital following the severe wounds he sustained from a fire outbreak caused by power surge.

The fire razed a two-bedroomed apartment the boy and his 94-year-old grandmother identified as Silverline Osuji were occupying.

This was even as the old woman lost all her belongings to fire that lasted for hours.

Before relatives could come to the widow’s aid, the inferno had wreaked havoc, living the boy’s body scalded.

An eyewitness, Mr. Francis Onwuka, who is a relative of the victims, told our correspondent at the scene of the incident at Umufuku-Umunchi in the Isiala Mbano Local Government Area of Imo State that the fire, which started at 8.30am, was as a result of power surge.

He said it was the shout of the young boy who struggled to rescue his aged grandmother from being burnt that alerted other neighbours.

The woman, whom he described as very poor, did not take anything out of her mud house.

The woman, who could not hold back tears, told our correspondent that the fire had rendered her homeless as she had nobody to build a new house for her.

She told Southern City News that she lost her husband over 40 years ago and only had one surviving son, who was still learning a trade and did not have the financial capacity to provide a new accommodation for her.

The woman therefore called on the state government and other spirited individuals to come to her rescue.

Southern City News saw villagers at various corners discussing the tragedy, which befell the woman, even as they decried her poor state.