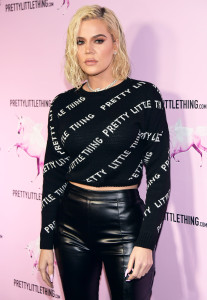 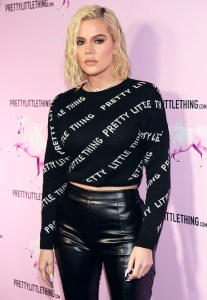 “Dear men,” the 34-year-old reality star’s post read. “Close your eyes. Imagine you have a daughter. Imagine she is dating a guy just like you. Did you smile? No. Then change.” 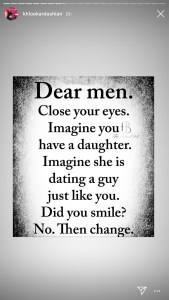 The Instagram Story comes four days after the former couple reunited on Sunday, April 14, to celebrate the first birthday of their daughter, True. The 28-year-old Cleveland Cavaliers player posted a sweet video of himself holding the little girl at the bash thrown by Kardashian. “My princess❤️❤️ I love you soo much,” Thompson captioned the clip.

The Strong Looks Better Naked author ended things with Thompson in February after he was spotted “making out” with Kylie Jenner’s best friend, Jordyn Woods, at a house party in Los Angeles days prior.

The NBA star’s rendezvous with the 21-year-old model wasn’t the first time he was unfaithful to Kardashian. Days prior to the Keeping Up With the Kardashians star going into labor with True, Thompson made headlines after pictures and videos of him kissing another woman began to surface. Multiple sources confirmed to Us at the time that the athlete had cheated on his then-girlfriend with several women throughout her pregnancy.

Despite any hard feelings that linger between Kardashian and Thompson, the Revenge Body star has vowed to keep their child out of the drama. “He is a good dad to her,” she wrote to a Twitter user last month. “My sweet and special baby True will NEVER be put in the middle of him and I. I can promise that.”

As for how the California native is moving forward after the split, an insider explained to Us in March: “Khloé is doing really well. She’s loving being a mom and happy to have the Jordyn and Tristan drama behind her. She’s looking forward to the future, not the past.”