I gave N1m to Olukere for relocation of shrine – Fayose 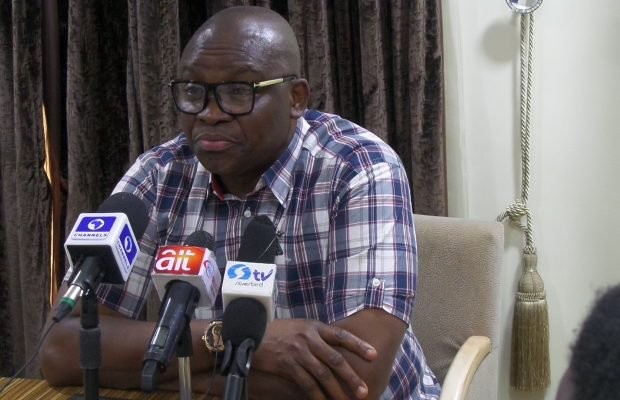 Kamarudeen Ogundele, Ado Ekiti
‎The Ekiti State Governor, Ayodele Fayose, has said the State Government paid one million naira to the Olukere of Ikere-Ekiti, Oba Ganiyu Obasoyin, for the relocation of a sacred tree serving as sacrificial spot for the town.
Government has insisted that the tree was obstructing the ongoing road dualisation in the town and must be cut down.
Some youths and traditionalists of the town had on Monday resisted an attempt by government agents and the contractor handling the project to remove the tree.

Oba Ganiyu Ayodele Obasoyin, said “cutting down the sacred tree and demolishing the Ereja was akin to passing a death sentence on him (Olukere).”
Speaking on Tuesday night in an interview programme titled Meet Your Governor on state radio and television, Fayose said ‎it was unfortunate that some community leaders and youths were trying to frustrate government’s efforts at developing the town and making life better for the people.
‎”It is my pleasure that we progress and our society becoming better.‎ In my first term, I started the dualisation and the project stopped where I left it and we started again when I came back to office. We decided to do the project in three phases and we are on the third phase. When we started, we met the Ogoga of Ikere, Oba Jimi Adu Alagbado, who said there were shrines along the project site for us to handle.
‎”Later, the Olukere came into the scene and said the affected area is his domain and that the issue of relocating the shrines did not concern Ogoga. I told him that we might not be able to bend the road.”
Share
Facebook
Twitter
WhatsApp
Pinterest
Linkedin
ReddIt
Email
Print
Tumblr
Telegram
Mix
VK
Digg
LINE
Viber
Naver
Previous articleU.S. Pays Farmers Billions To Save The Soil. But It’s Blowing Away
Next articleAriana Grande Resumes World Tour After Manchester Bombing With Emotional Concert Stop in Paris