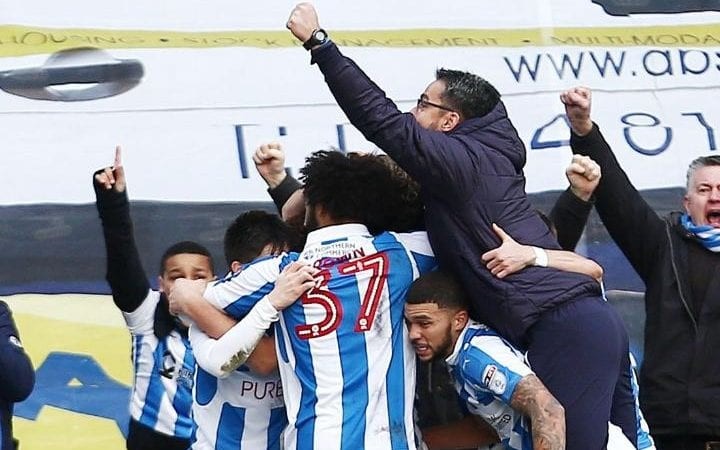 Huddersfield Town won promotion to the Premier League in dramatic fashion as Christopher Schindler’s penalty sealed a 4-3 shoot-out victory over Reading in the Championship play-off final on Monday.

David Wagner’s side will play in the English top-flight for the first time in 45 years after holding their nerve in the nerve-shredding penalty shoot-out that followed a tense 0-0 draw at Wembley.

Huddersfield’s promotion is worth at least £170 million ($218 million, 195 million euros) across the next three seasons and that figure could rise to in excess of £290 million if the club avoid relegation next season.

But the huge boost to their bank balance pales in comparison to the lifetime of memories Huddersfield’s players and supporters will take from their promotion triumph and next season’s unexpected place among the Premier League aristocracy.

Huddersfield have never played in the Premier League and haven’t been a force in English football since the 1920s, when they won the title three times under legendary boss Herbert Chapman.

Their current manager is a close friend of Liverpool boss Jurgen Klopp after working under his fellow German as Borussia Dortmund’s reserve team coach and now Wagner will get to face his former employer on equal terms.

A former mill town tucked away in the foothills of the Pennines in Yorkshire, Huddersfield is back on the football map and can look forward to playing host to the star-studded line-ups of Chelsea, Manchester United and company.

The last three Championship play-off winners were all relegated the following season but Huddersfield, whose £12 million payroll ranks as one of the lowest in the second tier, won’t care about that as they spend the summer celebrating one of the greatest days in the club’s history.

Reading finished third in the table, two places and four points above Huddersfield, but it was Wagner’s side who made all the running in the early stages.

Picked out by Aaron Mooy’s free-kick, Michael Hefele had a golden opportunity to put Huddersfield in front, but the defender headed wastefully wide from close-range.

If that was a moment to regret for Huddersfield, there was even worse to come as Izzy Brown produced one of the misses of the season.

Elias Kachunga carved open the Reading defence down the right flank, yet when he crossed to Brown at the far post, the on-loan Chelsea youngster somehow contrived to poke wide of the empty net from little more than a yard out.

It was an astonishing blunder, but Huddersfield’s failure to turn their dominance into a tangible reward wasn’t so surprising as 22 of their 25 regular-season wins this season were by a single-goal margin.

Having escaped punishment for their anxious start, Reading threatened for the first time when Lewis Grabban curled narrowly wide from long-range.

Reading needed to improve significantly and John Swift almost gave them the perfect start to the second half when he raced onto George Evans’ defence-splitting pass and drilled in a low strike that Danny Ward pushed away.

Jaap Stam’s side had stolen the momentum and nearly snatched the lead when Grabban pounced on a speculative ball over the top, only to flick his effort wide of the far post.

Yet as the tension mounted, the quality dipped.

Although Reading’s Garath McCleary and Huddersfield’s Nahki Wells both fired narrowly wide in extra-time, there was an inevitability about the impending shoot-out.

Huddersfield reached Wembley by beating Sheffield Wednesday on penalties and once again they hit the jackpot in the lottery.

Hefele missed Huddersfield’s second penalty as Ali Al Habsi plunged to his right to save, but Liam Moore blazed Reading’s fourth high over the bar.

When Ward kept out Jordan Obita’s kick, Huddersfield were within touching distance of promotion and Schindler slotted home to send them into dreamland.