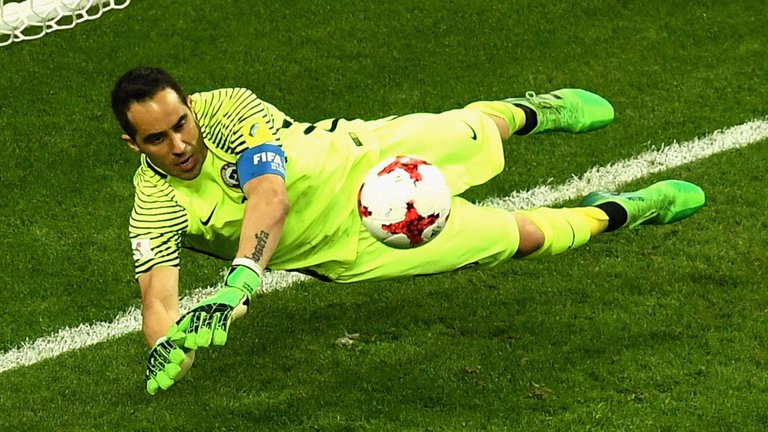 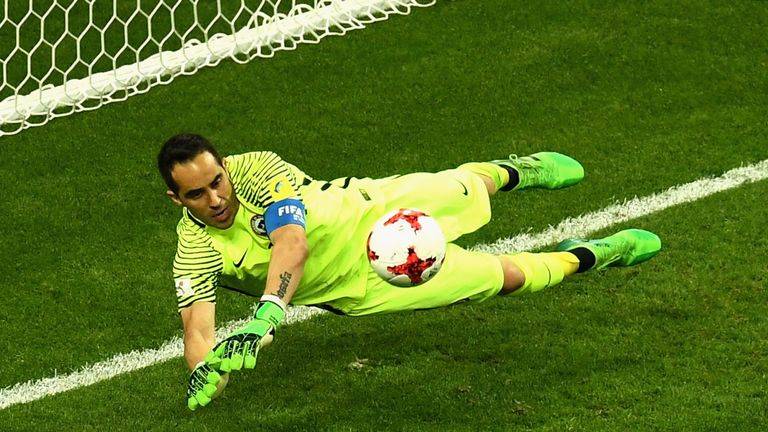 Claudio Bravo saved three penalties as Chile reached the Confederations Cup final after a 3-0 shoot-out win over Portugal on Wednesday.

The Chile captain denied Ricardo Quaresma, Joao Moutinho and Nani to send his team into Sunday’s final after the game in Kazan ended 0-0 after extra time.

Chile, who scored all three of their spot-kicks taken by Arturo Vidal, Charles Aranguiz and Alexis Sanchez, will face the winner of Germany against Mexico. Nani missed the decisive penalty as Portugal did not call on Cristiano Ronaldo, who likely was scheduled to take the fifth.

Chile created the better opportunities and were unfortunate not to win the game in extra-time when they struck the woodwork twice in quick succession through Vidal and Martin Rodriguez.

Both teams made a bright start, with Chile going close after six minutes through Eduardo Vargas. He latched onto a pass from Sanchez but Rui Patricio smothered his effort.

Portugal responded inside a minute when Ronaldo created their best opportunity, teeing up Andre Silva at the back post.

But Bravo reacted smartly for Chile to deny the new AC Milan signing.

The only other opportunity before the interval fell to Aranguiz but the Bayer Leverkusen midfielder snatched at his far-post volley.

Both sides lacked ambition after the break but Chile continued to force the clearer chances. Vidal nodded over from Jean Beausejour’s cross and Patricio saved sharply from Vargas’ opportunistic volley.

Portugal looked sluggish in attack with captain Ronaldo their biggest threat. He tested Bravo with a firm strike on the hour mark and saw a deflected effort drop two yards wide but ultimately the two teams settled for extra-time.

Chile pushed hard for a winner as Sanchez squandered a free header in the first period, while they were denied a penalty when Jose Fonte tripped substitute Francisco Silva in the box.

When Vidal then Rodriguez struck crossbar and post in quick succession in the final minute of extra time it looked set for Portugal to triumph on penalties.

But Bravo stepped up to deny three Portugal substitutes in the shoot-out, sending Chile into Sunday’s showpiece in St Petersburg.

Man of the match – Arturo Vidal

The Chile midfielder was all action throughout and came so close to snatching a winner for his country in the final minute of extra-time.

His penalty – Chile’s first in the shoot-out – also helped set the tone before Bravo’s heroics.

Chile will face the winner of Germany v Mexico in Sunday’s final, while Portugal will take on the loser in the third-placed play-off earlier on the same day.