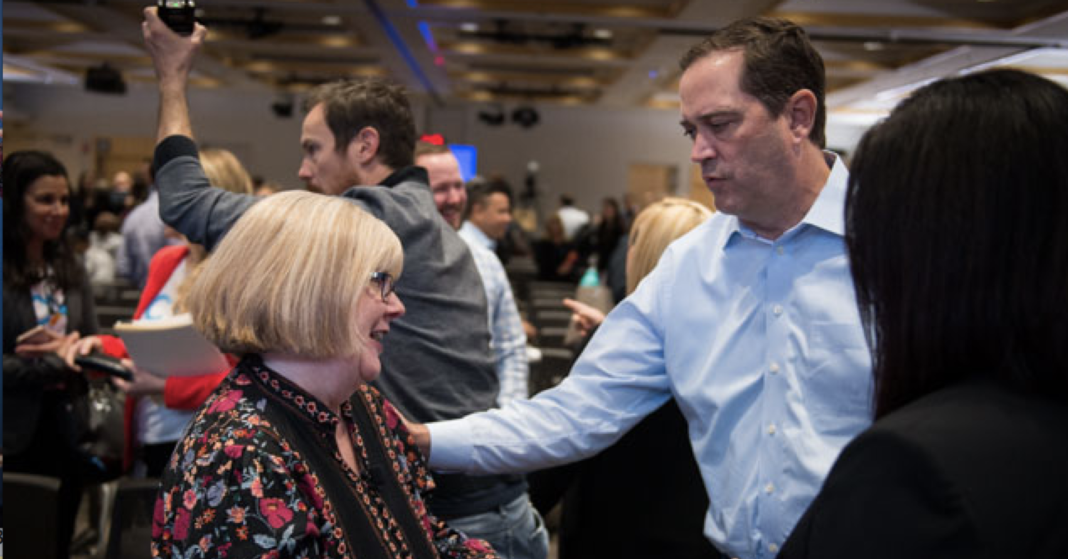 In June, less than a week after the shocking suicides of celebrities Kate Spade and Anthony Bourdain, Cisco CEO Chuck Robbins felt compelled to address the matter head-on with his employees.

From Orlando, where Robbins was attending a conference called Cisco Live, he sent a company-wide email.

“In light of recent tragedies, I wanted to step away from Cisco Live for a moment to talk about the importance of mental health,” he wrote. “Unfortunately, we all know friends, family, and coworkers battling mental health conditions, or maybe you’re going through your own struggles.”

Robbins, who took over the CEO role in 2015, encouraged employees to “talk openly and extend compassion,” asked that they “have each other’s backs,” and told them that professional support is available. Robbins had no idea what was about to happen. More than 100 employees responded to his note within days, some sharing in painful detail their own personal struggles.

“I didn’t understand the magnitude of the problem,” Robbins told CNBC in an interview. “The volume of responses we got back led us to be more active.”

Roughly one in five adults in the U.S. per year suffer from mental illness, according to the National Alliance on Mental Illness. The costs to treat depression, stress, anxiety and other ailments exceeds $200 billion a year, and for many employers the number of sick days and lost productivity associated with mental health represent one of their biggest expenses.

But relative to physical sicknesses, there remains a stigma in publicly addressing behavioral health. Insurers and corporations have been slow to recognize its importance, and many qualified health professionals, including psychologists and psychiatrists, don’t accept insurance, even in Cisco’s backyard.

Large employers across the country are just beginning to prioritize it through their benefits programs as part of a broader focus on employee wellness. Technology companies in particular are adopting new health programs as another way to attract and retain talent in the hyper-competitive market for engineers.

For Robbins, the turning point came last year when an executive confided in him about a family member who was struggling and potentially suicidal.

“I wanted to help, and in that process it became clear to me that this is a terrible situation and I really sensed the desperation that people feel,” Robbins said.

While he was becoming more aware of the problem, the suicides of Spade and Bourdain in early June spurred Robbins to take action. He set up a meeting with Francine Katsoudas, Cisco’s chief people officer, to brainstorm ideas.

With a green light from Katsoudas, Robbins wrote an email and sent it to Cisco’s almost 75,000 employees with the subject line “Making Mental Health a Priority.”

Because of the silence around mental illness, Robbins didn’t know if employees would be willing to open up about sensitive topics like depression and suicide. There was the risk that some might view it as an executive overstepping his bounds into their personal lives and others might wonder if they would face retribution now or in the future.

Brian Marcotte, CEO of the National Business Group on Health, said that among the dozens of large employers his group represents, some executives are starting to share their own stories as one way to open up the conversation.

“Beyond that, we’re seeing a big push among employers to reduce stigma around mental health and train their managers around signs and symptoms,” Marcotte said.

Kathy Burden, an executive in Cisco’s marketing department, is one of the employees who responded positively to Robbins’ email. Burden said she has a family member who struggles from a mental illness and she spends time volunteering with a support group.

Katsoudas invited Burden to join her for a panel discussion about mental health at Cisco Beat, a monthly company meeting that can include up to 15,000 or more employees connecting remotely. Burden also shared her story on an internal forum and got almost 50 comments and more than two dozen emails. Her colleagues began stopping her in the hallway to share their stories.

“I had never received an email like that before or heard anyone talk about mental health anywhere I’ve worked,” said Burden. “It was a relief that someone was making it OK. He swung open a door.”

On Oct. 10, in the middle of Mental Illness Awareness Week, Robbins sent out a follow-up email, this time with the subject line, “Top of Mind: Our Mental Health.”

“Although we’ve made some strides, there is much more to do for mental health to be viewed and supported the same as physical health,” he wrote. “We are looking at our benefits, evaluating mental health services, and working on removing the taboo that keeps people from sharing their struggles openly.”

He also tweeted about it:

Robbins said he plans to keep talking about the issue and responding to employee inquiries. Just before his interview with CNBC, he told employees at a Cisco Beat meeting that, “I’ve told you repeatedly, if it doesn’t put the company at risk or put me in jail, I’ll answer any question you have.”

He recently flew to Canada to launch a partnership with a local addiction center. Using virtual conferencing technology, Cisco was aiming to help people in remote areas get help and access to treatment without having to travel long distances.

Robbins said that he distinctly remembers one particular phrase that someone in the clinic told him about the importance of this type of service.

“I think one of the greatest lines is — mental health is health,” he said. “That’s a simple but powerful statement.”