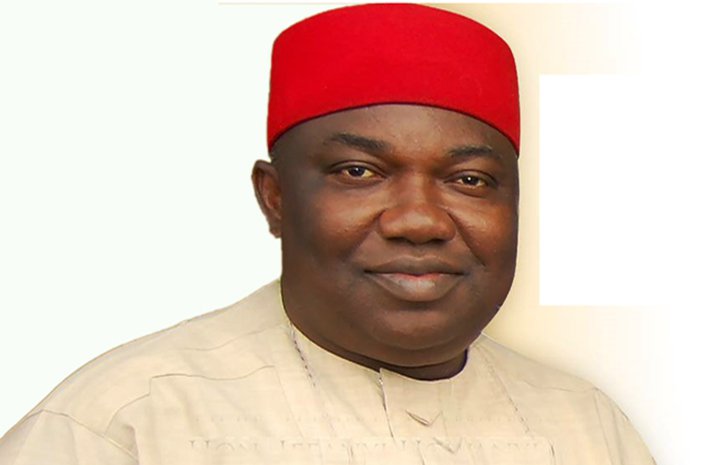 Governor Ifeanyi Ugwuanyi of Enugu State, yesterday, amid excitement inaugurated the 1000 youths recently engaged by his administration to clean up the state under the Enugu Clean Team Project.

Inaugurating the scheme at the popular Michael Okpara, Square, Enugu, Gov. Ugwuanyi stated that the project was in keeping with his administration’s vision and promise to create a cleaner, safer and healthier environment for the people of the state.

The governor added that the project will not only help reduce the risk of epidemics and other health hazards but will also help to improve the aesthetic outlook of the state, saying: “We are indeed hopeful that the project will help us achieve our aspiration of making Enugu the cleanest state in the country”.

He further stated that the project was also in line with the state government’s roadmap for generating employment and creating avenues to engage the teeming population of youths in the development process of the state.

“Accordingly, 1000 Enugu State youths have been recruited to participate in the project. This vision had also guided the creation of other youth development and empowerment schemes that are already being implemented in the state”, Gov. Ugwuanyi explained.

Promising that the state government will continue to provide the team with the necessary equipment and other enablers that will it function effectively, the governor charged the newly recruited youths to approach their duties with patriotic diligence and commitment for the full actualization of the initiative.

The governor, however noted that the task of keeping the environment clean should not be left to government agencies alone, urging residents, institutions and private agencies to join hands in ensuring a clean and healthy environment.

Earlier in his address, the Coordinator of Enugu Clean Team Project, Rev. Fr. Michael Amobi Ogbu expressed gratitude to Gov. Ugwuanyi for initiating the project and sustaining it thus far, disclosing that “we have been equipped with the needed paraphernalia for the project’s take-off, functioning effectively and efficiently”.

He added that members of the team have been trained and devoted to daily sanitation at their duty posts “on individual basis and collectively on weekends”, declaring: “There is no going back in the inner drive for “A Cleaner and Healthier Enugu State”.

Reacting to the development, a cross section of residents of Enugu who witnessed the ceremony has commended Gov. Ugwuanyi for his brave initiative in launching the project, saying that it was a demonstration of his untiring commitment to employment generation and social services and good governance in the state in line with his administration’s four-point agenda.

They stated that the initiative was the first of its kind in the state, adding that it will not only ensure that the state is cleaner and healthier, but will also provide employment for the unemployed youth to better their lives.

Dr. Chidi Nzeobi, a resident of Independence Layout, Enugu, applauded the governor for the unique innovations his administration has brought to bear in the governance of the state, saying that it gladdens his heart that the programmes and policies of the governor are people-centered.

“I came here not just to witness this epoch-making event, but because I m happy and satisfied with the innovative style of leadership of this governor, Gburugburu. His leadership and programmes touch the lives of the commoners, the ordinary people.

“1000 youths is not just a small number, and as we heard him speak here a while ago, he said he will increase the number to 2000. This is great. It means Enugu will be cleaner and healthier and more unemployed youths will be gainfully employed. I sincerely commend him for his good works in Enugu State”, he said.

Gov. Ugwuanyi shortly after the event inspected the ongoing evacuation of refuse dump at Ogui Nike site by Enugu – Port Harcout expressway that had been in existence in the past 12 years without any intervention.